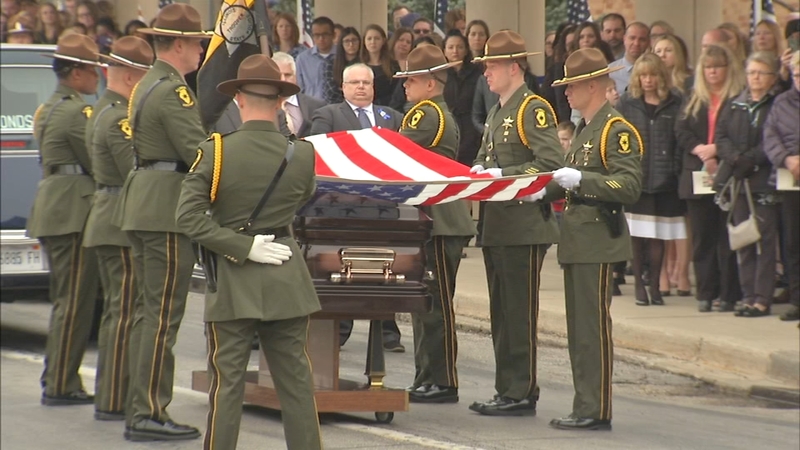 GRAYSLAKE, Ill. (WLS) -- Friends and family of Illinois State Police trooper Gerald Ellis gathered in Grayslake Friday to say goodbye to the trooper, who was killed by a wrong-way driver last weekend.

Funeral services got underway at around 10 a.m. as Trooper Ellis' colleagues from District 15 based out of Downers Grove filled several rows at the College of Lake County's James Lumber Center for the Performing Arts in Grayslake. His uniform was on display as thousands mourned.

Trooper Ellis was remembered for his strong work ethic and his great sense of humor and his willingness to help others. Governor JB Pritzker was among the mourners and spoke at the funeral.

Trooper Gerald Ellis died in the line of duty early Saturday. The 36-year-old is the third state trooper to die in a traffic crash so far this year.

The 11-year veteran of District 15 in Downers Grove was killed after his squad car collided with a wrong way driver on the Tri-State Tollway just south of Lambs Farm. The wrong way driver was also killed.

State police said Ellis grew up in Macomb and graduated from Western Illinois University. He served with the U.S. Army Reserves and joined the state police in 2008.

He is survived by his wife and two young daughters.

Thursday night, police officers from across the area came to pay their respects at a visitation service.

"Over the years and losing friends and knowing people who have passed away, each one kind of makes it a little more difficult," said Waukegan Police Lieutenant Tony Joseph. "Sometimes, when these things can be avoided, it makes it even more difficult to try to take in and deal with it."

Illinois State police are encouraging citizens to participate in one last goodbye as they hold a procession starting at The College of Lake County in Grayslake.

It will wind its way up to the Wisconsin border, back to his home off of Route 73 and then head to Lake Villa for a private burial.

The funeral for an Illinois State Police trooper who was killed in a wrong-way crash will be held Friday morning.

There will be increased patrols and enforcement zones across Illinois as part of a crackdown on drivers caught using handheld devices.

Trooper Chris Lambert, 34, was fatally struck by a vehicle on I-294 in Northbrook as he responded to a multi-vehicle crash.