Texas leads US in murders of trans women of color: report 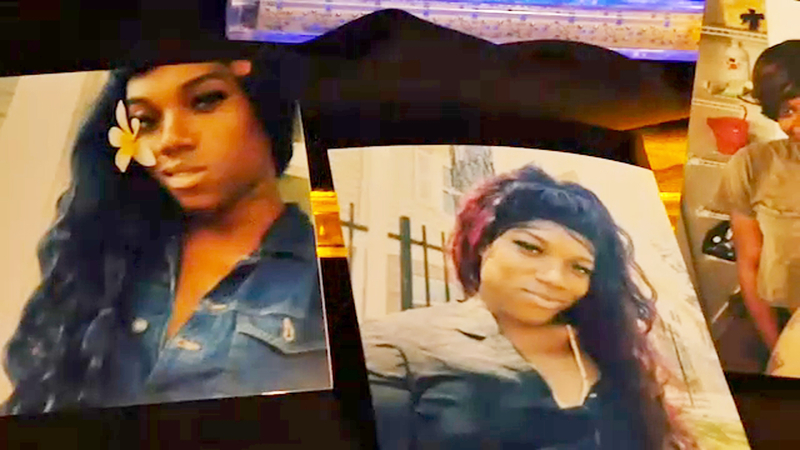 Texas leads US in murders of trans women of color: report

HOUSTON, Texas -- "My son came out to me Thanksgiving day of 2017. 'Mama, I like boys,'" said Joyce Williams, who watched her son Trevian transition into Tracy. "Even to the point of when it came time to dress as Tracy, I had to give him tips and pointers."

"Tracy was a highly energetic life of the party type of person," added Williams.

But on July 30 of this year, police found the 22-year-old's body at a gas station near the Katy Freeway. Investigators said Tracy's boyfriend, Joshua Bourgeois, 25, stabbed her multiple times. While police don't have a clear motive, friends say Bourgeois allegedly killed Tracy after she tried breaking up with him.

Police say 25-year-old Joshua Dominic Bourgeois was in a relationship with the transgender woman when he killed her.

"I haven't been the same since that day, God honest. The call can mess a mother up," said Joyce.

Tracy was added to a growing list of trans women of color murdered.

Italia Marlow was the latest transgender killing in Houston. Police said she was shot several times and killed in September by Raymond Williams, who's still on the run.

It's a growing epidemic across the country. In 2018, The Human Rights Campaign tracked 26 trans killings, the most ever recorded in a single year. This year, 22 trans people have been killed. The majority of those victims were trans women of color under the age of 30.

That's why Monica Roberts, a Houston area transgender rights advocate, said the recent murders are a grim reminder of the work that still needs to be done when it comes to gender equality.

"Every now and then, I'll run into somebody that's ignorant, and, you know, that I have to check," she said.

Roberts believes the numbers of black trans women murdered is actually much higher due to "misgendering."

According to the Human Rights Campaign, 77 percent of trans people in Texas do not have any identification that reflects their preferred name or pronouns.

Roberts runs TransGriot, a website that tracks the violence against transgender people. She says Tracy's body sat in the morgue for 10 days before HPD reached out to the LGBT community for help identifying her.

"It was a lag before we knew," said Roberts.

She adds, in some of the cases, the women were killed by someone they were in an intimate relationship with. In other cases, she says some men who love trans women will do just about anything to protect their reputation.

The brutal violence against trans women of color also shines the light on the problems within the problem. In Texas, 34 percent of trans people live in poverty. Many in this community face homelessness and end up turning to the streets for work and survival.

"There are some of my sisters who are doing sex work. We have a 20 percent unemployment rate due to the fact that we don't have a nondiscrimination ordinance over Texas in employment," said Roberts.

Griffin took ABC13 on a ride-along late one Saturday night. Her team hits the streets trying to get these women out of prostitution. She even helps with addictions and housing.

"They are highly misunderstood. They are not freaks. They're not perverts. They are people with red blood running through their veins that deserve consideration and they deserve understanding," she added.

We met up with a transgender woman and former prostitute named Nikki. She's been clean and off the streets for a year.

"In one night, you can make around $2,000," Nikki said. "If you come around 6 o'clock and stay until the next morning, you can probably make all that money."

We took her back to her old stomping grounds. We had to change locations twice. Nikki kept looking around, paranoid, shaking and afraid her old pimps would recognize her and come after her.

"I got a gun to my head already. They jumped me before. They robbed me and they almost raped me," she said.

Nikki says she's lost a lot of friends to the violence.

"It breaks my heart because I could've been one of them," she said.

These horrific stories of violence against black trans women are becoming all too familiar. Now, Tracy's mom is hoping by telling her daughter's story that no other trans woman of color will have the same tragic fate.