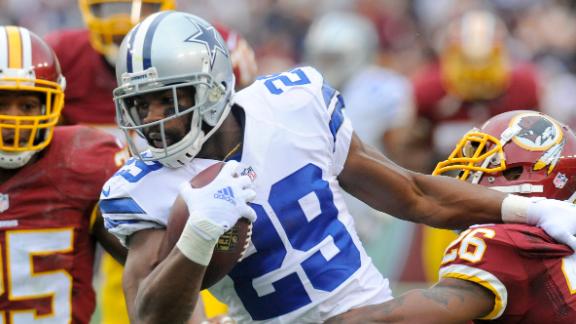 Murray set the team mark for most rushing yards in a season with a 32-yard gain in the first quarter of Sunday's 44-17 victory over theWashington Redskins, passing Emmitt Smith's mark.

On the following play, Bryant caught a 23-yard touchdown pass to give him 16 for the season, one more than Terrell Owens had in 2007.

Smith established the team rushing record in 1995 with 1,773 yards on his way to becoming the NFL's all-time leading rusher.

Murray, who was selected to his second straight Pro Bowl earlier in the week, finished the season with 1,845 yards on 393 carries. The 32-yard carry was his longest since a 40-yard carry on Dec. 4 against the Chicago Bears.

He expounded on those thoughts in comments provided by the Cowboys.

"I couldn't be happier for him. He is very deserving of this recognition. This is something that I know DeMarco will share with the whole team, because he knows that they all had a hand in his success.

"I am proud of him because I know how hard it is to do what he did this year. I am also proud because I've watched him bounce back from some injury setbacks in his first few years. He's worked through all that, and he deserves to have this record. I want him and the whole team to keep up this level of play and carry it into the playoffs."

Bryant's record-breaking touchdown came after a replay challenge by Cowboys coach Jason Garrett. Initially ruled out of bounds, Bryant was able to tap his left foot inbounds for a 23-yard touchdown to give the Cowboys a 17-7 lead.

On the Cowboys' previous drive, Bryant scored on a quick throw from Tony Romo, leaving cornerback David Amerson in his wake for a 65-yard touchdown four plays after DeSean Jackson gave the Redskins a lead with a 69-yard TD catch.