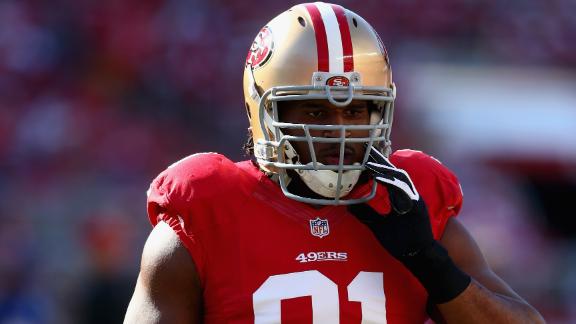 PHOENIX -- John Fox did not frame it as a zero-tolerance policy.

But the Chicago Bears coach said Wednesday that defensive end Ray McDonald will be held accountable in all aspects after agreeing to a one-year contract with the storied franchise a day earlier.

"I think Ray understands we have a standard," Fox said at the NFL owners meetings. "He's going to need to meet that standard moving forward much like all of the players we'll acquire moving forward."

The 49ers released McDonald last December after law enforcement officials in San Jose, California, said he was under investigation on suspicion of sexual assault. McDonald hasn't been charged in that case, which remains open.

The Bears, who gave up more yards than all but two teams last season, took a chance on McDonald after he flew to Chicago on his own dime to meet with team chairman George McCaskey.

The Bears had been opposed to signing McDonald before he essentially recruited them as he tries to get his career back on track.

"I have a lot of respect for the fact that the young man wanted to come in and meet with ownership after he was told no," Fox said. "Flew in on his own dime after George said yes, he'd be willing to talk with him and probably much like people who have spent a lot of time with him felt a little more comfortable moving forward."

What also helped McDonald's cause is a strong recommendation he received from new Bears defensive coordinator Vic Fangio. The two were together the previous four years in San Francisco -- Fangio was the 49ers' defensive coordinator from 2011 to '14 -- and Fangio vouched for McDonald, something that put him on the Bears' radar long before he signed with them.

"His name came up very early in the process, I think probably a day after Vic Fangio was hired, so it's not a snap decision by any stretch," Fox said. "A lot of research in all areas of Ray McDonald. Like most players a lot goes into the evaluation process. No different with him. Obviously any off-the-field problems we take very serious. They do happen. As much as you would like to keep them out of your building you coach against it, just like you do on the field. We felt strong about it, him especially, leaning heavily on four years of the relationship that [defensive backs coach] Ed Donatell and Vic Fangio had with him."

As for what he heard from Fangio about McDonald, Fox said, "He thought he was a great teammate. He thought he was one of the leaders on the defense, he and Justin Smith. His teammates spoke very highly of him, and you're around teammates a lot in this business. I think some of the issues that occurred quite frankly shocked his teammates."