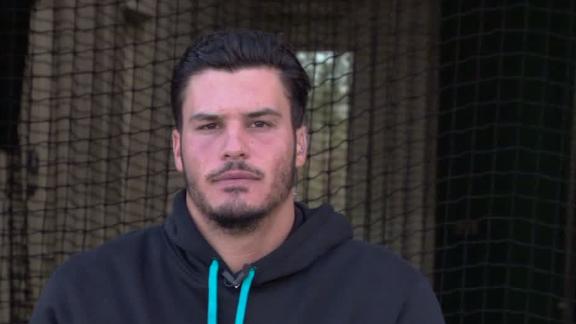 The prizes for defensive excellence were announced by Rawlings for the 60th time.

Arenado, the All-Star Colorado Rockies third baseman, joins Ichiro Suzuki as the only players to win at least five Gold Gloves to start their careers, according to the Elias Sports Bureau.

"Obviously, five, it's a pretty special number," Arenado said. "It means a lot. ... Right now I want to try to win as many as I can while I'm healthy."

Heyward joins Andre Dawson as the only Cubs outfielders to win consecutive Gold Gloves, according to ESPN Stats & Information.


The World Series championHouston Astros and NL championLos Angeles Dodgers were both shut out. Astros pitcher Dallas Keuchel had won the past three years. Meanwhile, the Twins were represented by two first-time winners in Buxton and Dozier.

"This is a special moment," Buxton said.

Barnhart, the first Reds catcher to win since Hall of Famer Johnny Bench in 1977, also became the second different catcher (theSan Francisco Giants'Buster Posey won in 2016) to win in the NL in the past two years after theSt. Louis Cardinals' Yadier Molina won eight straight at the position. Posey and Molina were again nominated this year.

"It's as good as it gets for me. I'm a defensive guy, and I take a lot of pride in that," Barnhart said. "I am taken aback by it, to be honest with you. ... Buster and Yadi are obviously two of the best guys in baseball."

The "Best of the Best" honor -- voted on by fans --- will be unveiled Friday and will be given to one AL winner and one NL winner.

Additionally, Derek Jeter will be recognized with the Rawlings Heart of Gold Award and Reggie Jackson will be honored with its Lifetime Achievement Award. Omar Vizquel and Ivan Rodriguez will also be inducted into the Rawlings Gold Glove Award Hall of Fame.