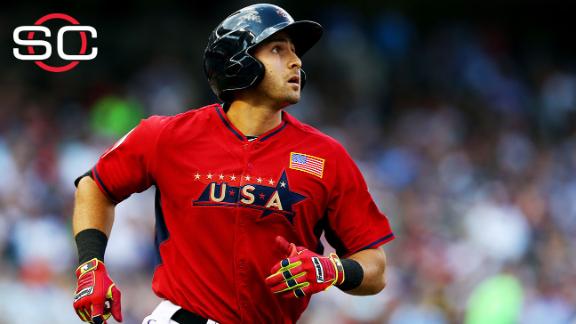 ARLINGTON, Texas -- The Texas Rangers will get top prospect Joey Gallo some major league experience while third baseman Adrian Beltre is on the disabled list.

Beltre was placed on the 15-day DL on Monday with a sprained left thumb, and the Rangers will purchase Gallo's contract from Double-A Frisco on Tuesday before their series opener at home against the Chicago White Sox.

"He'll be in the lineup a majority of the time he's here," general manager Jon Daniels said. "We called him up with the intent that he's going to play."

The 21-year-old Gallo, who was the MVP of the 2014 Futures Game during All-Star Weekend, is hitting .314 with nine homers and 31 RBI in 34 games for Frisco. All nine of his homers have come in the past 23 games .The Rangers had planned to promote him Monday to Triple-A Round Rock, which is where Daniels expects Gallo to go when Beltre comes off the disabled list.

Beltre, a four-time All-Star who has won four Gold Gloves, will miss at least two weeks after spraining and cutting his left thumb while sliding into second base Sunday.

After hitting 40 homers combined in rookie ball and Low-A in 2013, Gallo set a Rangers minor league record with 42 last year between High-A Myrtle Beach and Frisco. He was the first player since Chicago White Sox prospect Ron Kittle in 1981-82 with consecutive 40-homer season in the minors.

Gallo was a supplemental pick, 39th overall, in the June 2012 amateur draft. At 6-foot-5, he'll join the Cubs' Kris Bryant as the tallest third basemen in the majors.

"We've got somewhat of a defined period with Adrian coming back. ... Clearly a guy that's coming back, he's going to be our third baseman, get his job back." Daniels said. "There's not going to be any quarterback controversy, so it's a little bit of a lower-pressure spot."