Underdogs thrive, the Pac-12 survives and more in a chaotic Week 8 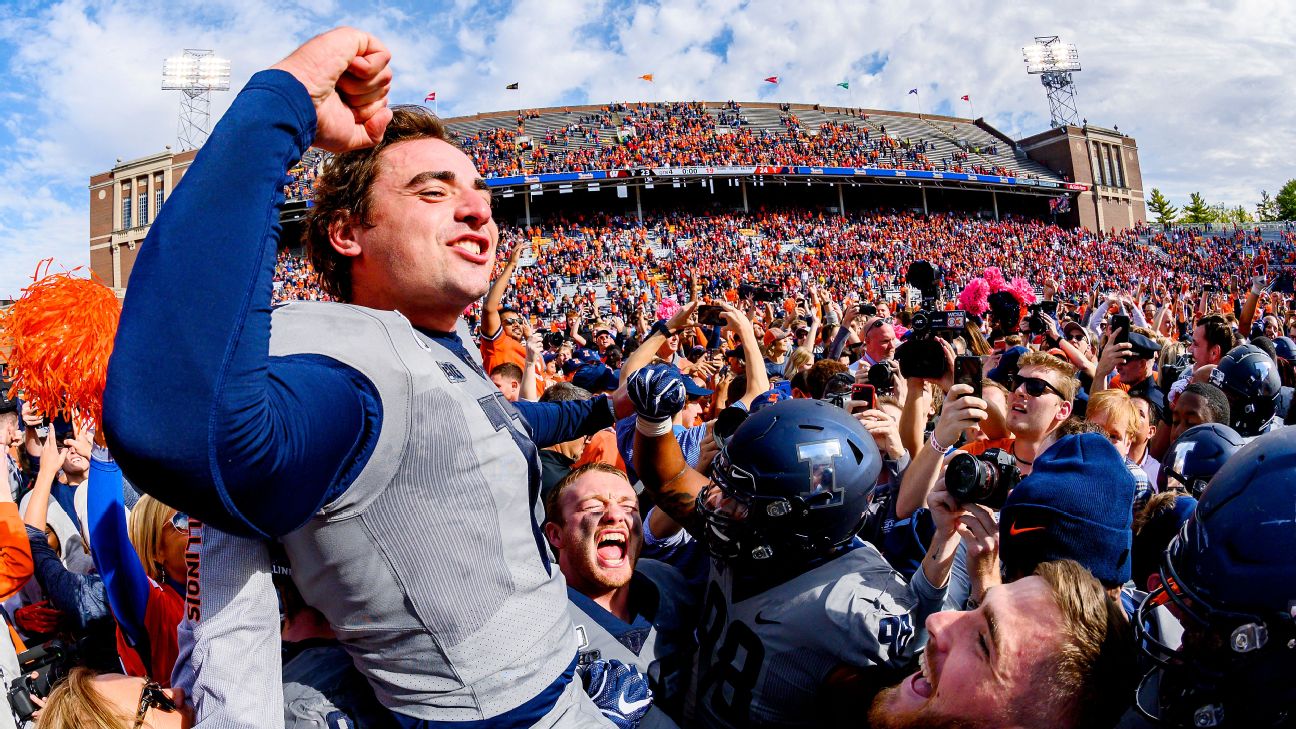 Lovie Smith has the look of a man who has lived a full life. A man doesn't grow a beard with that many grays unless he has had some real highs (he coached in a Super Bowl) and lows (with Rex Grossman as his QB). Smith, Illinois' coach, has seen some things -- horrible things, such as losing by double digits to Rutgers or trying to coach Jay Cutler for four years. Not much can shock Smith anymore, but even he couldn't have seen this coming.

Just a week ago, Wisconsin was the darling of the early-season playoff push. The Badgers were dominant in all phases, with an offense led by the nation's best running back (Jonathan Taylor) and a defense that pitched shutouts more often thanGerrit Cole. And Illinois? Well, it was, presumably, also a football program.

As trap-game scenarios go, this one was obvious. Wisconsin won in dominant fashion against Michigan State last week and soaked in endless praise. Next week, Ohio State awaits. On Saturday, there was just the small matter of a trip to Champaign, Illinois. What could go wrong?

The Illini's 24-23 upset as 30.5-point underdogs was the biggest by a Power 5 team in college football since 2017, the second largest in Big Ten history and utterly stunning amid a playoff conversation that has had precious few tangents through eight weeks.

The shocker in Champaign was the headline act, of course, but Saturday was full of dizzying twists.

There was the astonishing back-and-forth in Texas, where Les Miles proved he still is the Mad Hatter, going for two after a Kansas touchdown to take a 48-47 lead with 1:11 to play. Texas was among the lucky ones Saturday, though. A raucous final drive led to a 33-yard field goal and the win.

There was no similar luck for several other heavy favorites.

Woeful Georgia Tech, trying desperately to find any way to move the ball on offense, stunned 19-point favorite Miami. Sure, it took a fumble recovery in the end zone, a fake punt that went for a touchdown and overtime, but Geoff Collins got his first ACC win.

Missouri knows a thing or two about upsets. Its debacle at Wyoming in Week 1 proved one of the season's biggest stunners. But one bad turn deserves another, and Missouri delivered, falling 21-14 as a 21-point favorite to Vanderbilt.

How ugly were those losses? Let's count the ways.

Illinois, Georgia Tech and Vanderbilt have combined to lose games this season to Eastern Michigan, The Citadel and UNLV, yet they all pulled stunners on Saturday.

Wisconsin, Miami and Missouri were each favored by at least 17 points. It was the first time since 2007 that three favorites that large all lost outright on the same day.

Missouri, which seemed to have completely righted the ship after that opening loss to Wyoming, becomes the first SEC team to lose twice as a double-digit favorite in one season since Florida in 2001.

For any bettors who backed Illinois, Georgia Tech and Vandy -- this would be done only on a dare -- a $100 parlay on the three would've paid out a whopping $207,800. That'd pay a nice chunk of some coach's buyout.

Add Georgia's brutal first half against Kentucky or South Carolina's keeping things close against Florida into the fourth quarter and Saturday provided an exceptional reminder that for all we think we know about how the season will unfold, college football is chock-full of craziness.

Remember when the Pac-12 was dead? Of course you do -- it was just a few hours ago. Really, the league's obituary was written before the season and again after Oregon lost to Auburn in Week 1, and it was revised again as Washington led the Ducks 21-14 at halftime on Saturday.

But like a good movie villain or Rolling Stones guitarist, the Pac-12 just keeps plugging along, and Oregon pulled off a35-31 win.

Now, it wasn't without controversy. Washington tried a bit of trickery by having a player hide in the end zone on a kickoff, only to see the huge return overturned by a flag for ... hiding?

In the end, the play probably wasn't the difference. Oregon's defense made some critical second-half adjustments,Justin Herbertwas exceptional yet again and the Ducks had second-half TD drives of 79, 75 and 70 yards.

Believe it or not, the Pac-12 still is very much alive for a playoff berth. As Georgia and Wisconsin fell from the ranks of the unbeaten in stunning fashion over the past two weeks, Oregon keeps winning. Herbert has been one of the country's best players, and the Ducks' D is bordering on something special.

Sure, the league still is playing to an inside straight, but if the big boys out east keep falling, the door certainly could be kicked open.

If a guy gets pantsed on national TV, then jokes afterward that "there was supposed to be a full moon in Starkville tonight," that is your Heisman favorite 100% of the time.

Hurts threw one incompletion on Saturday. So he has some work to do to get better.

Of all Saturday's craziness, Tagovailoa going down with an ankle injury in the first half against Tennessee might be the most impactful moment of the day.

Fields had four TD passes in an annihilation of Northwestern on Friday. He'll get an angry Wisconsin D next week that should be his biggest test to date.

He won't win it, but Gainwell has been an absolute star since taking over for injured Patrick Taylor in Week 2. Against Tulane on Saturday, Gainwell became the first FBS player with 100 yards rushing and 200 yards receiving in a game since 1997.

Jalen Hurts and the Oklahoma offense ensured that there wasn't much drama in a dominant win over West Virginia, so the Sooner Schooner had to provide the excitement.

The accident looked like something out of Oregon Trail, and it served as yet another reminder that life on the frontier is never easy. Fortunately, no one was hurt -- which is more than we could say for West Virginia's defense.

Hurts finished with five total touchdowns, including three through the air for the sixth time in seven games. Through seven games, Hurts has more total yards and a better completion percentage than predecessorsKyler Murray or Baker Mayfielddid at the same point. Plus, he has matched Murray's 30 total touchdowns.

Trevor Lawrence tossed two more interceptions on Saturday, both of them in the end zone, and Clemson's offense continues to look just a bit off. No doubt that'll mean more hand-wringing and "What's wrong with Clemson?" conversations, but the hubbub over Lawrence's eight interceptions has overshadowed some terrific defense.

Louisville entered play Saturday having scored 103 points in its past two games, but the Cardinals did next to nothing in a loss to Clemson. The Tigers' D held Louisville to just 263 yards and 10 points, with the TD coming well into garbage time.

Although the offense was expected to run roughshod this season, Clemson's defense entered the year with questions after losing four starters on the line, two linebackers and star cornerTrayvon Mullen. So how's it going? The 2019 defense is allowing fewer points, has more takeaways, has forced more three-and-outs and astonishingly has seven more sacks than last year's group through seven games.

Randy Edsall bonus of the week

It was a big day for UConn, which -- as its Twitter account pointed out -- was still alive in the fourth quarter. Oh, the Huskies lost 24-17 to Houston's non-redshirting players, but we appreciate the "Carpe Diem" attitude of appreciating life at every turn. And based on our understanding of his contract, that's a $5,000 bonus to Edsall for continuing to breathe through the entirety of this game.

Huskies With Some Life!

That's why he's a punter

Leave it to the SEC to offer some truly head-scratching fakes on special teams, and Arkansas might have taken things to a new low Saturday, with punter Sam Loy running the fake and -- well, we guess you'd call it a pass.

It was a woeful play in another woeful loss for the Hogs. But at least they didn't use their kicker as a lead blocker.

Under-the-radar game of the week

The train wreck that is the ACC Coastal continues to be absurdly, beautifully fascinating, as evidenced by Virginia Tech's 43-41 win over North Carolina that needed six overtimes. UNC blew multiple 10-point leads. The two teams traded TDs in a 40-second span in the fourth quarter. Missed field goals? They had four in all. At one point in overtime, Mack Brown called a timeout that iced his own kicker! Most importantly, we were treated to history -- the first college football 2-point-conversion shootout. Under the new OT rules, after four overtimes, teams trade 2-point tries. UNC did nothing on its first two, but Hokies third-string QB Quincy Patterson scrambled for the score and the win in the sixth OT.

The end result is a Virginia Tech team that is somehow 5-2, despite playing two lackluster games vs. FCS teams and getting blasted at home by Duke. Meanwhile, North Carolina is 3-4 and just 12 points shy of being 7-0. The ACC Coastal: Better to be interesting than good.

Under-the-radar play of the day

Perhaps the best catch of the day came in Dover, Delaware; you're forgiven if you missed it. Merrimack QB Christian Carter lofted a throw into the end zone, targeting receiver Johnny Rosario, who was blanketed by his defender along the sideline. No worries, though. Rosario reached up with one hand, grabbed the ball, tapped his toe in bounds and celebrated a score ... even if the rest of his team took a minute to realize what the heck had just happened. 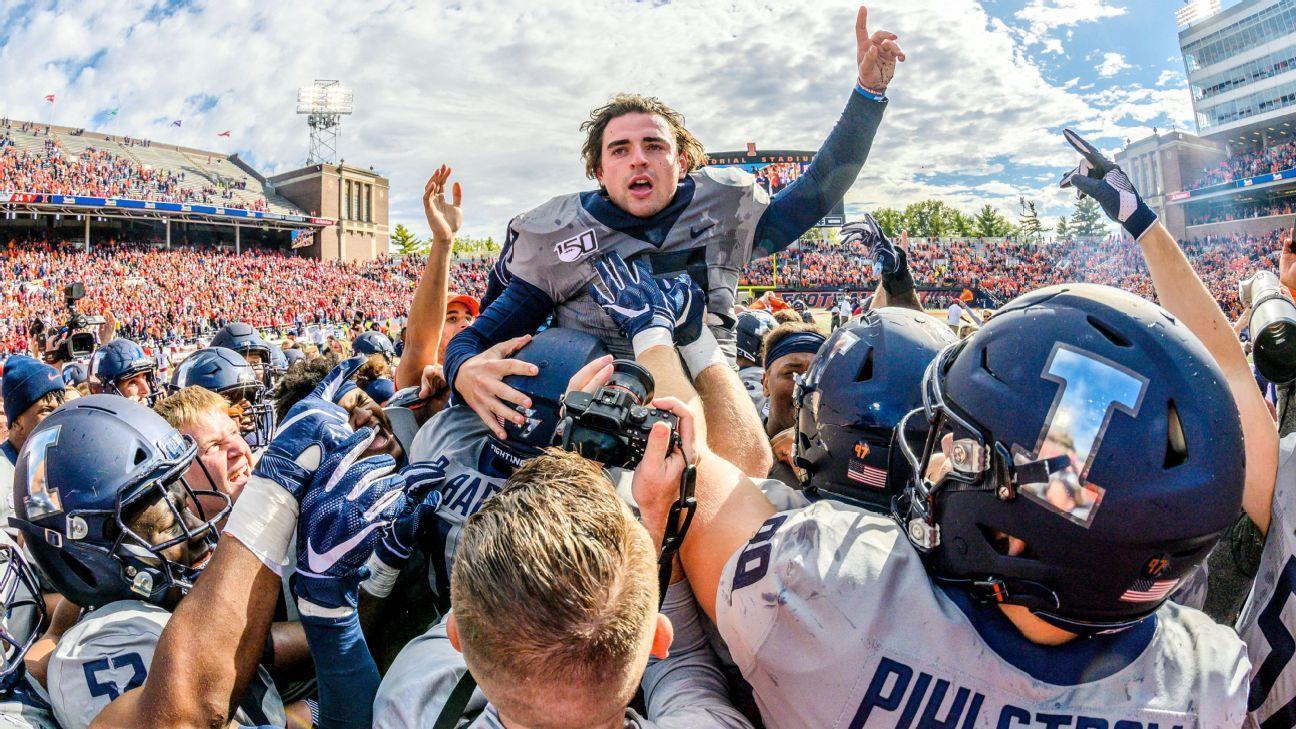 Illinois comes back and upsets sixth-ranked Wisconsin
Illinois uses a couple of fourth-quarter Wisconsin turnovers to overcome a nine-point deficit and win 24-23. 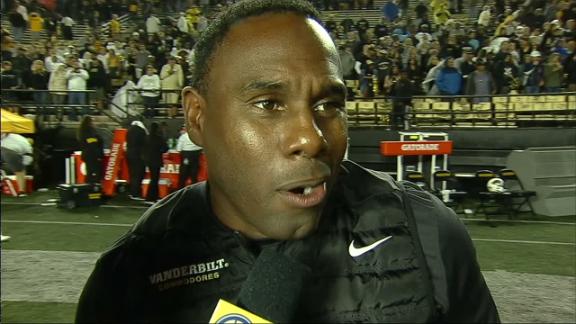 Vandy coach Mason fired up after upset
Derek Mason proclaims there's a lot of people who want his job, but he's the only one built for it after Vanderbilt upsets No. 22 Missouri. 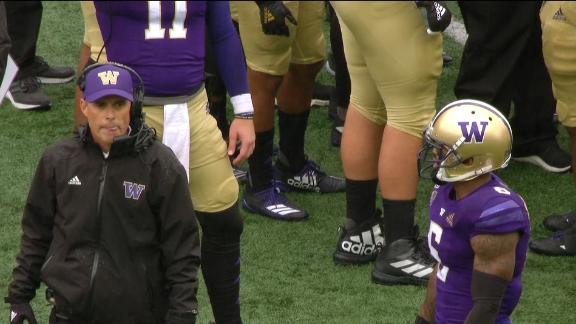 Washington penalized over returner hiding in end zone
The Huskies are penalized for unsportsmanlike conduct when a returner lies down in the end zone to fool Oregon. 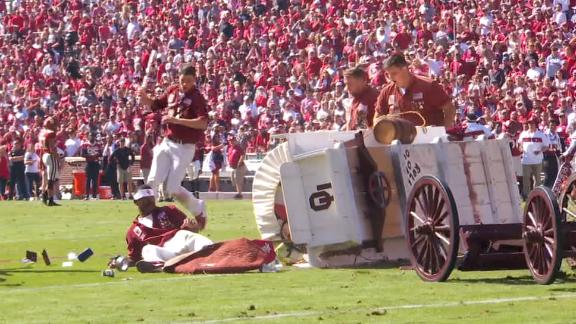 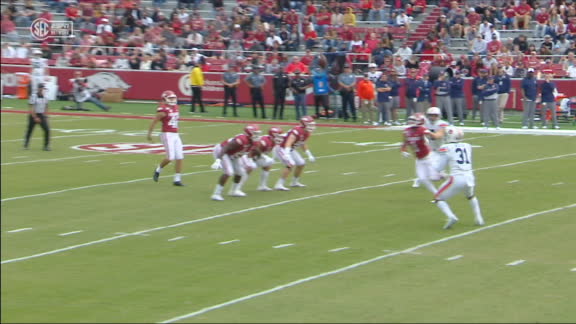 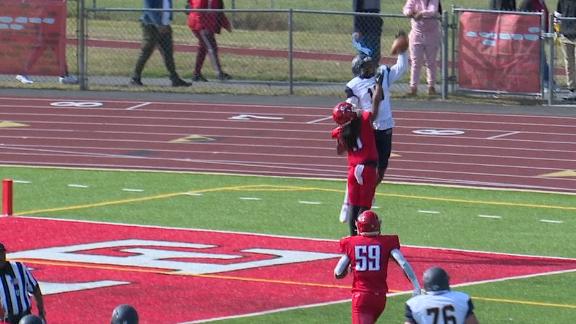