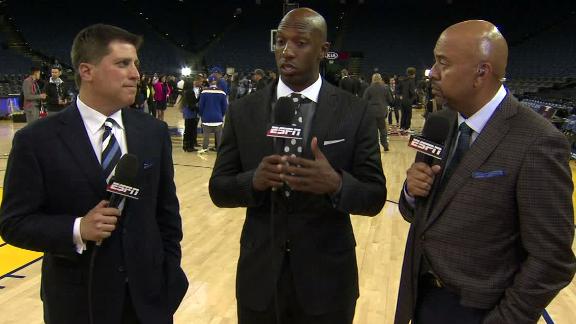 The Warriors are 5-7 favorites at the Westgate SuperBook in Las Vegas. The Cleveland Cavaliers are the second favorites at 3-1, followed by the San Antonio Spurs at 7-2 and the Oklahoma City Thunder at 16-1. The Toronto Raptors have the second-best odds out of the Eastern Conference at 25-1.

The Warriors, led by reigning MVP Stephen Curry, won a record 73 games during the regular season. They defeated LeBron James and the Cavaliers to win last year's championship but didn't begin this season as the favorites. Instead, the Cavs, in the inferior Eastern Conference, were anointed the preseason favorites at 2-1.

Golden State was the second favorite at 4-1 when the season tipped off, but quickly emerged as the betting market's clear-cut choice. By early February, the Warriors were even money to win it all, and, as of this week, more money had been bet on Golden State to win the title than any other team at MGM's sportsbook.

The Warriors open the playoffs as big favorites over the No. 8 seed Houston Rockets in a rematch of last year's Western Conference finals. The Rockets are 500-1 to win the championship.

The injury-plagued Memphis Grizzlies, at 1,000-1, are the biggest long shots in the playoff field. Memphis faces San Antonio in the first round.

The NBA playoffs tip off Saturday.