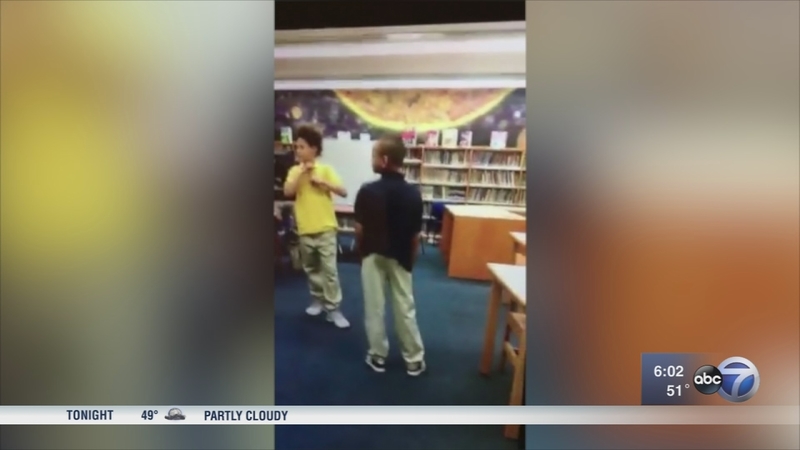 CHICAGO (WLS) -- Angry parents are demanding answers after seeing cell phone video of their children fighting at an after school program at Amos Alonzo Stagg Elementary School in Chicago's Englewood neighborhood, in which you can hear a supervisor telling them to fight.

Parents of the children involved said they were both traumatized by the fight. The principal at Stagg Elementary School sent a letter home to parents Wednesday, telling them of the incident and saying the supervisor is not a CPS employee.

In the video, one boy tackles the other, throwing him to the ground and shoving his forearm into the other boy's neck. There are other students and an after school supervisor in the room. She can be heard talking to the boys several times during the encounter.

"Y'all can't be hitting each other in the face and stuff like that," she is heard saying at one point.

Another student videotaped the entire incident on a cell phone. The two boys involved are actually friends in the fifth grade, and their parents are outraged.

"You don't expect for nothing like that to happen. We already living in a bad environment," said Dawn Bowman.

"It's sad. Because like you said, you take your kids to school to learn. And there's enough stuff going on in this world, and you try to teach your kids not to do this, not to do that, and then they go to school and they forced to do it," said Tamia Blackshire.

One of the boys had a swollen black eye after the fight. They said the supervisor locked the door and told them to fight.

On the video, the supervisor tells the boys, "Wait, y'all gonna be friends after this right? Y'all got to because real friends fight and then come back together."

The supervisor is not a CPS employee. She worked for the Union League Boys and Girls Club, whose president issued a statement Wednesday night saying, "I am aware of the altercation and we will take the appropriate disciplinary action. We have a 96-year history of safety and zero tolerance for anything that puts kids at risk."

"You a role model. We're leaving our kids here with you to try to better them to become better people and kids growing up and you're teaching them something completely opposite," Blackshire said.

The Union League Boys and Girls Club president confirmed the supervisor is no longer employed by the organization. Police are investigating the incident and parents said they hope charges are filed.

The Boys and Girls Club of Chicago released a statement Wednesday night, saying, "We have become aware of a story being reported in the local news this evening regarding a recent incident at Amos Alonzo Stagg Elementary School during which an employee of Union League Boys & Girls Clubs was witnessed encouraging two young students to fight. We have received some inquiries regarding this incident and would like to clarify that Union League Boys & Girls Clubs is a separate and distinct organization from Boys & Girls Clubs of Chicago. Boys & Girls Clubs of Chicago does not, as an organization, have a presence at that school."
Related topics:
englewoodchildrenfightcontroversial videoschool fight
Copyright © 2022 WLS-TV. All Rights Reserved.
TOP STORIES
1 shot by Chicago police officer downtown, 2 more in custody: CPD
2 charged with murder of 8-year-old girl in Little Village: CPD
2 more COVID-based test companies investigated by IDPH, IL AG
FBI: QR code scams on the rise
Saint Anthony hospital moving to Little Village
Man released from prison after twin brother confesses to murder
Chicago Weather: Breezy, milder Thursday
Show More
Arne Duncan lays out violence plan, possibly hinting at mayoral run
Michigan governor not only original target of militia group: feds
Who is Rhone Talsma? Chicago Jeopardy! champ dethrones Amy Schneider
Brothers tortured by Jon Burge still picking up pieces of lives
Husband shares journey after losing wife in crash that killed Kobe
More TOP STORIES News