'Start Here': Wildfires, Sinema, Stan Lee. What you need to know to start your day. 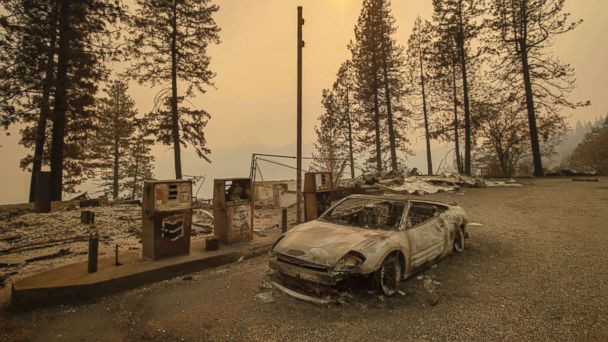 The death toll continues to rise as wildfires across California burn thousands of homes to the ground.

More than 200 people were missing after the Camp Fire, which ravaged Northern California's Butte County, leveled the town of Paradise and claimed the lives of at least 42 people. The fire is the deadliest and most destructive in state history.

We spoke to Melissa Schuster, a town council member who escaped before the fire destroyed her home.

"Within a few minutes," she recalled, "everything went black. It was darker than any midnight I have ever been in. There was no light."

Sinema built an insurmountable lead in the race during the state's lengthy process to count mail-in ballots. As of Sunday, 200,000 votes had yet to be counted.

"Democrats had a pretty good election night, they've had a very good week since then and Arizona is kind of icing on the cake," ABC News Political Director Rick Klein tells us.

McSally called Sinema to concede last night, and in a video message wished her "all success as she represents Arizona in the Senate."

A botched Israeli intelligence operation triggered an escalation of attacks in Gaza after 10 Palestinian militants, including a Hamas military leader, and one Israeli officer were killed.

Palestinians fired hundreds of rockets from Gaza into Israel, and the Iron Dome missile defense system intercepted many of the launches, according to the Israeli military. Israel retaliated with airstrikes.

"Hamas is essentially taking revenge right now," ABC News' Jordana Miller, who's based in Jerusalem, tells us. "This is their kind of payback by raining rockets down on southern Israel. The question is, how far are they going to take this?"

Stan Lee, the superhero behind Marvel Comics, has died at 95.

From "The Fantastic Four" and "The Avengers" to "The Amazing Spider-Man" and "X-Men," the comics legend brought a diverse group of heroes to life.

'I don't know what they're going to charge me with': The former Washington bureau chief of Infowars tells ABC News he expects to be charged as part of Robert Mueller's Russia probe.

'Tens of thousands of additional jobs and tens of billions of dollars': Amazon is expected to officially announce HQ2 locations today.

'If he invited me to a public hanging, I'd be on the front row': A white candidate in Mississippi's special election runoff says something that many people, including her African-American opponent, do not like.

From our partners at FiveThirtyEight:

Stan Lee's incredible legacy: Marvel's former editor-in-chief and the creator of beloved characters including Spider-Man, Iron Man, the X-Men and more, has died at 95.

Burned-out vehicles are seen on the side of the road in Paradise, California, after the Camp Fire ripped through the area. (photo credit: Josh Edelson/AFP/Getty Images)

For more great photos from around the world click HERE.

This time-lapse video shows the destructive Woolsey Fire spreading into Malibu, as seen from Venice Beach, about 20 miles away.

All right, you're off and running. You can always get the latest news on ABCNews.com and on the ABC News app. Details on how to subscribe to the "Start Here" podcast are below. See you tomorrow!