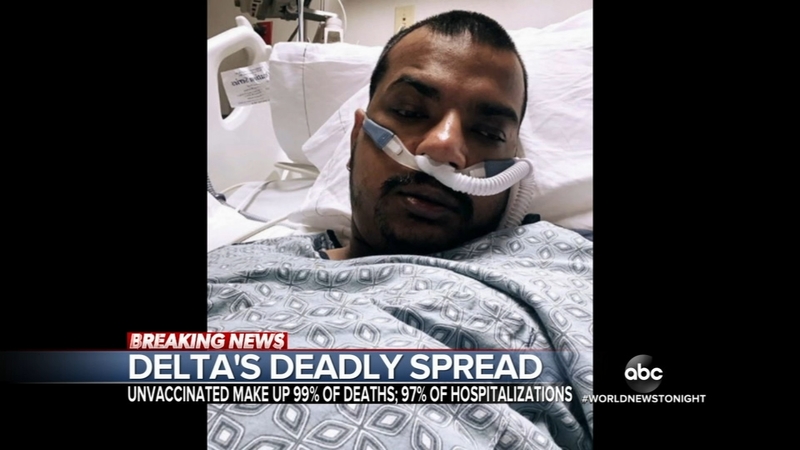 LOS ANGELES -- The founder of the multinational Hillsong Church told CNN that COVID-19 vaccines are a "personal decision for each individual to make with the counsel of medical professionals" after a congregant who publicly refused inoculation died of complications from the disease.

Harmon had said on social media that he would not receive the vaccine, even when he was fighting COVID-19 in a hospital this month.

"Stephen was just a young man in his early 30s," Houston wrote, announcing Harmon's death on social media. "He was one of the most generous people I know and he had so much in front of him."

Houston expanded on his social media posts in a statement to CNN, saying that "any loss of life is a moment to mourn and offer support to those who are suffering and so our heartfelt prayers are with his family and those who loved him."

As the Delta variant takes hold in Los Angeles County and severe illnesses rise, many health care workers say they feel like they're reliving the start of another nightmare.

"On any medical issue, we strongly encourage those in our church to follow the guidance of their doctors," Houston said, emphasizing that the church's focus was on spiritual well-being.

"While many of our staff, leadership and congregation have already received the COVID-19 vaccine, we recognize this is a personal decision for each individual to make with the counsel of medical professionals," Houston's statement reads.

Hillsong Church, founded in Australia, has congregations around the world. Harmon attended Hillsong in downtown L.A.

CNN sought comment from the Harmon family but did not receive a response.

Prior to him saying he was infected with COVID-19, Harmon made two posts on Twitter on June 3 in which he parodied Jay-Z's "99 Problems" lyrics -- saying he had 99 problems but "a vax" wasn't one.

Just over a month later, Harmon had pneumonia as a result of COVID-19 infection and was sitting in a hospital bed in a COVID ward, according to his Instagram posts.

Even while in a hospital, Harmon was adamant that he would not receive the vaccine, posting he wasn't "anti-vax" but was "pro information."

"i'm not against it, i'm just not in a rush to get it," he wrote in a July 8 Instagram post. "Ironically, as I continue to lay here ... in my COVID ward isolation room fighting off the virus and pneumonia."

He added he wouldn't get a vaccine even after recovery.