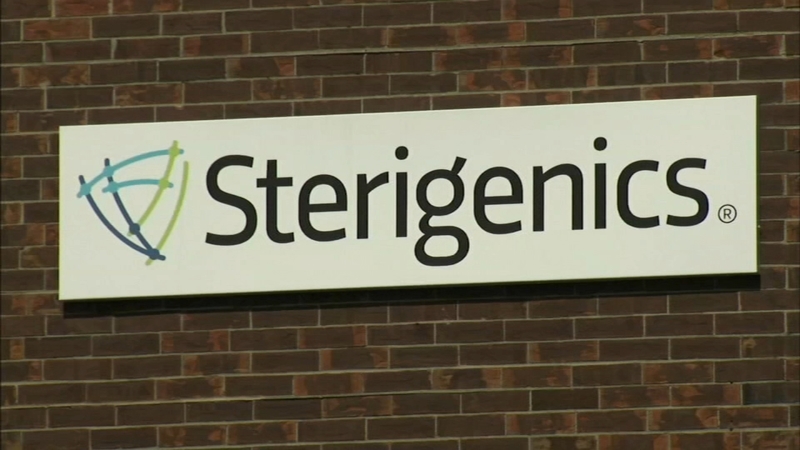 WILLOWBROOK, Ill. (WLS) -- The EPA held a meeting about Sterigenics International in Willowbook Thursday, about a week after the agency acknowledged problems with its air testing, but said other data points to an elevated health risk.

The meeting was standing room only, as hundreds of residents pointedly demanded answers.

"I'm going to be brief. All I want to know is are my people safe?" asked Willowbrook Mayor Frank Trilla.

Hundreds of people have come forward seeking legal representation for health issues after living near the Sterigenics plant in Willowbrook. In one of the lawsuits, a woman says she developed breast cancer with no family history of it and lives one fourth of a mile away from the facility which has been in operation since 1984.

The facility uses ethylene oxide to sterilize medical equipment and food products. Controversy surrounding Sterigenics was sparked after EPA research linked unusually high cancer risks in the Willowbrook area to the company's emissions of the gas.

"In many areas of the country - including Willowbrook, Illinois - we predicted there could be higher levels of risk than we previously believed existed," said Bill Wehrum, assistant administrator for the U.S. EPA.

Randy Nicklaus said he was diagnosed with bladder cancer and his wife Karen with breast cancer. They live two miles from Sterigencis and have been talking to neighbors.

"Within six-and-a-half blocks, there's 15 ladies that have had breast cancer," said Karen Nicklaus.

The EPA released a statement last week saying they may have overstated the emissions coming from the plant due to flawed testing.

Sterigenics challenged EPA science, saying, "The real travesty has been the needless fear and worry about safety that good people of Willowbrook have had to wrongly endure."

But the EPA said it stands by its initial cancer risk assessment, which is supported by other data.

"Our community feels victimized not only by Sterigenics, but by the agencies and the officials who are supposed to protect us," said Neringa Zymancius, Stop Sterigenics Group.

Sterigenics did not have a representative at Thursday night's meeting, but in a statement said the EPA's methodology is "illogical". The EPA said it's conducting new air tests and hopes to have an updated assessment in a few weeks

The battle over potentially dangerous chemicals at a suburban plant was in court Thursday.

Thursday morning, Sterigenics wanted nine lawsuits reassigned to one judge, but several law firms want individual jury trials for their individual clients. The judge decided he will have to make the decision with another judge in the near future.

"Ethylene oxide causes cancer," said Antonio Romanucci, plaintiff's attorney. "They know this. They knew this, but they hid it. They hid it from the Willowbrook community and they hid their discharge emissions from the government too."

"Sterigenics has never accepted responsibility for what they've done, but what have they started to do recently? They're taking ads out in newspapers. They're doing their marketing. They're doing their advertising. So even today, they have not accepted responsibility for what's happened to this community," said Jeffrey Kroll, an attorney for the plaintiffs.

Senator Tammy Duckworth is pushing legislation that she says would help the EPA better protect the public.

"I am requiring the EPA to change how they go about notifying the public," she said.

Thursday night, the EPA is providing more information to the community based on its research so far at a community forum at 7 p.m. at Ashton Place Banquets in Willowbrook.

Mallory Clark used to live near the facility and attended the EPA open house to get answers.

"My health just so rapidly decreased when I moved closer to the facility," Clark said. "I don't want anyone to have to go through what I go through every day."
Dr. Susan Buchanan has studied the effects of ethylene oxide.

"The risk of cancer is higher than we would want it to be but it is not going to be very common," she said.

Meanwhile, Sterigenics maintains that its facility, which has been in operation since 1984, is operating safely.

Last week, Sterigenics released a statement saying, "This new EPA disclosure also invalidates the Agency for Toxic Substances and Disease Registry ("ATSDR") report, which was already questioned by experts. The EPA's flawed samples were the same samples from which the ATDSR selectively chose data as the basis for its August report.

"Now we know the controversy regarding our Willowbrook facility was created by a study that was based on flawed air samples. Unfortunately, the flawed report has needlessly created fear in the hearts of Willowbrook residents, stigmatized the community and caused good people to wrongly worry about a facility that operates safely and performs a critical service to our health care system.