One of the people who died in the crash was identified to the Cook County Medical Examiner's Office as 16-year-old Anjel Moreno, of Rockford, Illinois.

Emergency crews responded around 5:55 a.m. to a report of a crash in the 3100-block of West Roosevelt Road. Chopper 7HD was over the scene around 6 a.m.

Two people died and one person was injured Wednesday morning in a crash involving a car and a truck on Chicago's West Side, according to the Chicago Fire Department.

Police said Moreno and an adult male were in a dark-colored Chevy Trax heading north on South Kedzie Avenue when the driver blew the red light and slammed into a flatbed truck heading east on Roosevelt.

Investigators have not said who was behind the wheel. They are looking into why the driver failed to yield to the traffic signal.

"It actually sounded like a bomb," said Aaron Dickens, a neighborhood resident who was shaken after witnessing the crash. "The truck had the right of way. It was the car's fault. I know the family is going to be devastated though. It's kind of sad."

"For it to hit the truck that hard and for pieces of the truck to fly way over here..." said Seprina Redmond, a neighborhood resident.

The impact left the small car wedged underneath the truck and sent debris flying. A piece of the vehicle struck a 60-year-old woman who was standing at a nearby bus stop, police said. She was transported to Mount Sinai Medical Center with minor injuries.

Moreno and the other man were trapped in the Chevy and pronounced dead at the scene, police said. The man's identity has not yet been released.

No one else was hurt in the crash. 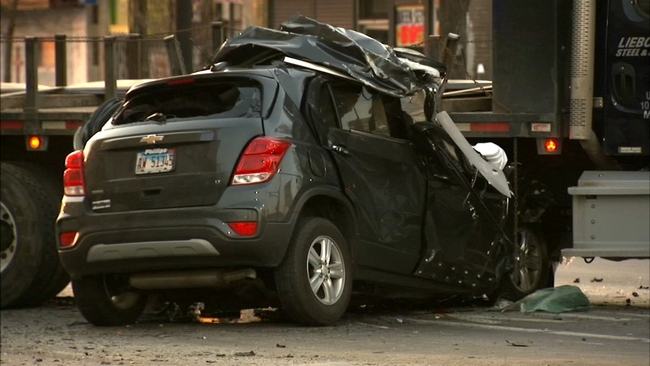