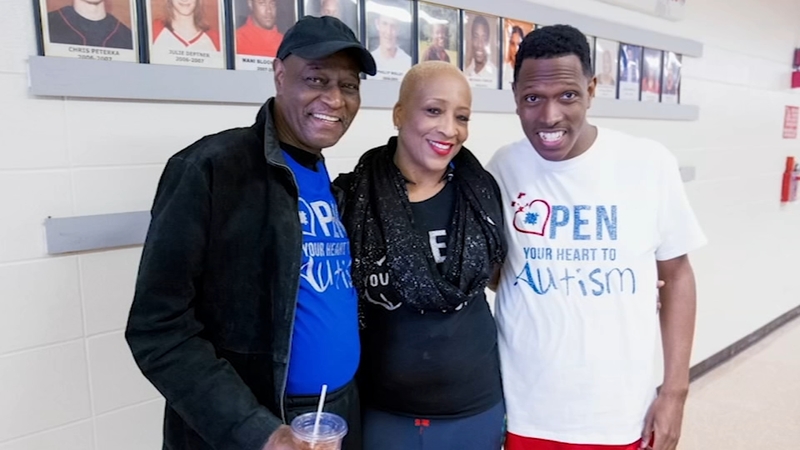 Mother of special needs son provides resources for others

CHICAGO (WLS) -- It's often said that necessity is the mother of invention, and that is the inspiration for one Chicago mother who needed help and decided she probably wasn't alone.

It's the story of a family that just grew frustrated. They were simply trying to do the best they could for their autistic son and the results they got were bigger than they could have ever have imagined.

There is an unbelievable bond between Debra Vines and her son Jason.

"I can't put it into words because when I think about him my heart just smiles because he knows nothing but love," Vines said.

Jason was diagnosed with autism when he was just 18-months-old. At the time, Debra and her late husband were lost and looking for help near their home in Forest Park.

"I didn't know anybody that had any special needs children at all," Vines said, "and so I just looked and looked and couldn't find anything and this happened for 10 years. [There were] just a few things but we had to go way out of our community."

That's how The Answer, Inc. was born. It's a non-profit providing resources and support for families dealing with special needs, especially on the West Side and western suburbs. They've been advocating for people affected by developmental disabilities since 2007.

"In under served communities, especially black and brown communities, the resources are very limited," Vines said. "Our families don't get our children diagnosed as early as they should and so by the time they get diagnosed, sometimes, I'm not going to say it's too late, but it's a lot more challenging."

Through her family struggles blossomed an organization that provides not only education and recreation, but also a shoulder to lean on.

"Here's the thing... I have friends that love me, love me deeply, but they don't understand what I go through," she said, "but when I have that conversation with another special needs mom, 'let me tell you what so-and-so-did,' we have that synergy."

The beauty behind it all is that this all started with one mother's love for her own autistic son.

"I want to show the community and other parents that you don't have to be ashamed of your special needs child. Yes he acts out and sometimes he does particular things, but he's mine and I want to show the community that autism does not hurt," Vines said.
Report a correction or typo
Related topics:
community & eventschicagoforest parkautismchicago proud
Copyright © 2022 WLS-TV. All Rights Reserved.
CHICAGO PROUD
Josephine 'Mother' Wade featured in new cookbook
'Our way of giving back': Family makes care packages for homeless
Chicago saw stories of hope in 2021 amid COVID-19 challenges
Maywood native turns football into film passion
TOP STORIES
Chicago weather forecast includes snow into Monday | Live radar
Girl, 8, killed by stray bullet ID'd: ME
5 tax changes that can boost your refund this year
Family demands justice after 23-year-old woman found dead after date
COVID mandate draws protestors rallying against proof of vaccination
5 people found dead inside Milwaukee home, police say
$45K raised for Bradley officer recovering from deadly hotel shooting
Show More
$6M worth of cocaine laced with fentanyl seized in Wisconsin
Chicago Weather: AM snow, mostly cloudy Monday
Woman killed in 'targeted ambush' at her birthday party in CA
Police lift SUV to rescue woman, 70, pinned underneath: VIDEO
US draws down Ukraine embassy presence as war fears mount
More TOP STORIES News