WLS
By Jason Knowles and Ann Pistone and Madeline Scott
CHICAGO (WLS) -- A joint investigation by the ABC7 I-Team and Chicago Sun-Times uncovered the suburbs making the most money from red light cameras, and found that most drivers get cited for turning right on red.

Dozens of angry drivers at court hearings, and even several red light camera insiders, all told the I-Team that the vast majority of tickets are handed out to people who go right on red. The I-Team found some of those people came to a complete stop.

Critics call it a money-generator, but suburban officials and a red light camera company insisted it's about safety.

The line of people outside a Dolton courtroom are all contesting red light camera tickets -- most busted for right on red.

"I think it's bogus. They're just trying to make money off of everyone," said John Tyler.

Online videos show many slowed down and some people actually stopped. Sixty percent who contested on this particular day in Dolton court had their tickets thrown out.

Jason Knowles: Why are you annoyed?
Michael: Because I stopped. If I stopped, it's $100 for them.

And in Berwyn, nearly all right on red tickets were dismissed on two different days.

"I shouldn't have had to come here to contest this ticket because once your wheels come to a complete stop, you're stopped," said Bryant Anderson.

"It should have been dismissed to begin with because I did make the stop," said Sejal Shah, whose ticket included video showing he stopped.

"That's why they have this right to come before me and this hearing," said Anthony Bertuca, court adjudicator in Berwyn.

What is the likelihood of getting your ticket dismissed?
If you do decide to contest a red light camera ticket, your odds of success may vary 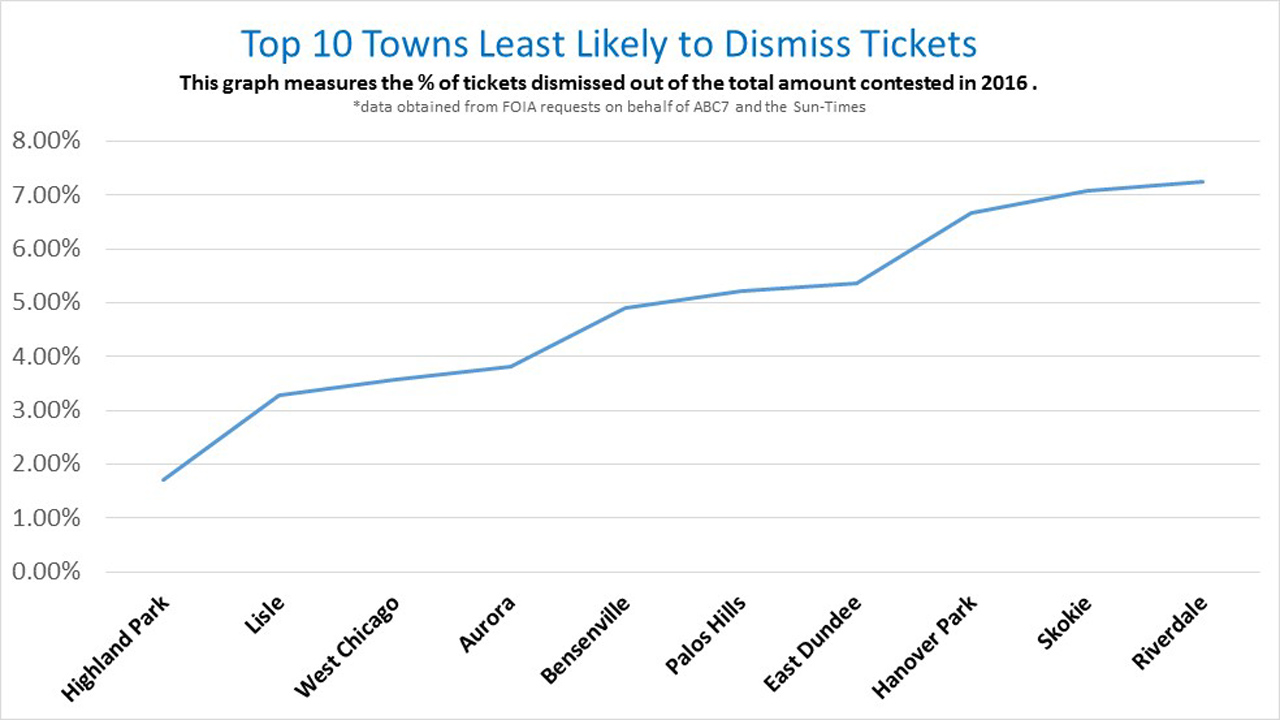 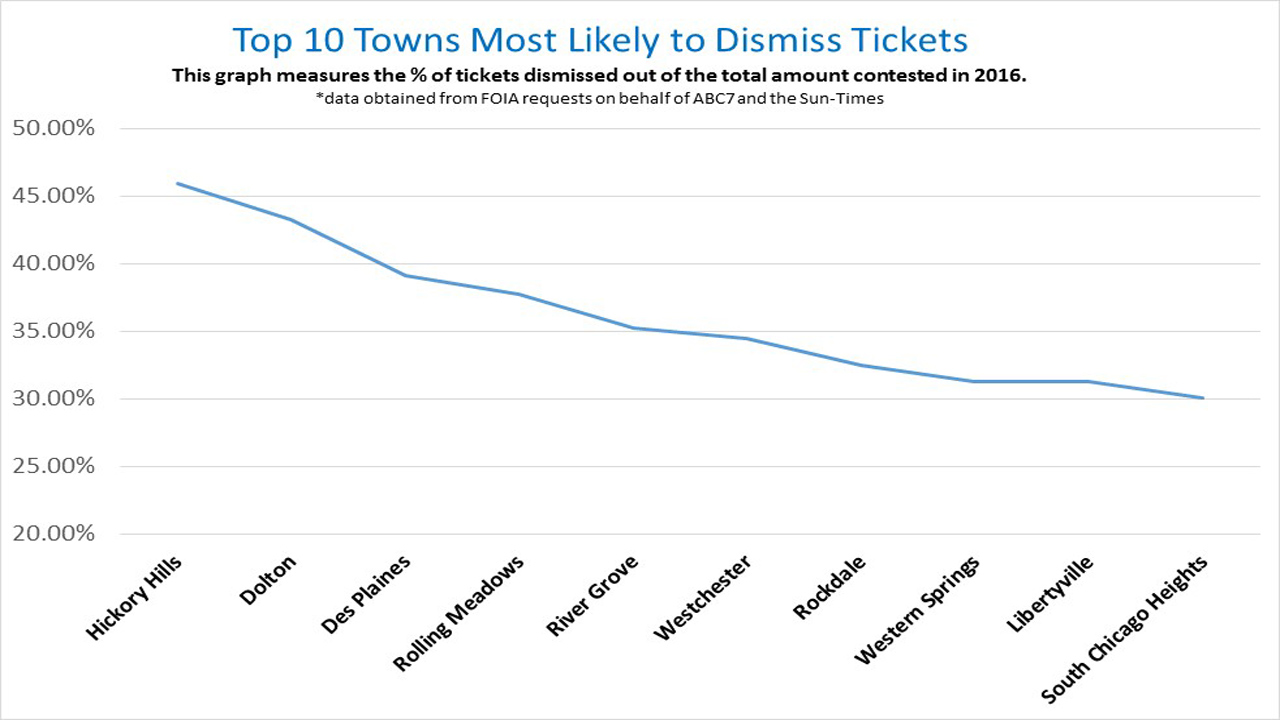 "There is nothing in the Illinois Vehicle Code that says you have to stop for a certain period of time," countered Mark Wallace, Citizens to Abolish Red Light Cameras. "People come to us from all over the city and the suburbs with tickets and what we're finding is about 95 percent of the people who come from the suburbs, those tickets are right on red."

Several suburban officials also said the majority of tickets are right on red. The COO of SafeSpeed, which operates some cameras in Berwyn and Dolton, said most people roll through the stop.

Jason Knowles: So even your own data shows 80 percent of people are being ticketed are right on red.
Chris Lai: Yes
JK: Is that fair?
CL: It's not a matter of fair. It's a matter of are you breaking the law or not. The law says you need to stop. It's a matter of public safety.

"There is going to be some kind of error and we try to minimize that error as much as we can," Lai said.

"There's two sensors on the ground to determine your position and your speed, and based on that, we say, 'This is a potential violation,'" he said. "We can't fabricate violations and we don't make any determination. All we do is capture the violations and police officer reviews it."

And that's the case in most suburbs. In North Riverside, one officer dismisses some citations before they're sent to drivers.

The I-Team and Dan Mihalopoulos of the Chicago Sun-Times wanted to know which suburbs were making the most revenue from right on red. Together, they collected data under the Freedom of Information Act.

"There are more than 80 towns that have red light cameras in the Chicago suburbs, and they may have raked in a total of more than $160 million over the last three years," Mihalopoulos said.

Hillside was No. 3 with $8 million, then Melrose Park with $8.3 million. Berwyn topped the list with $8.5 million. 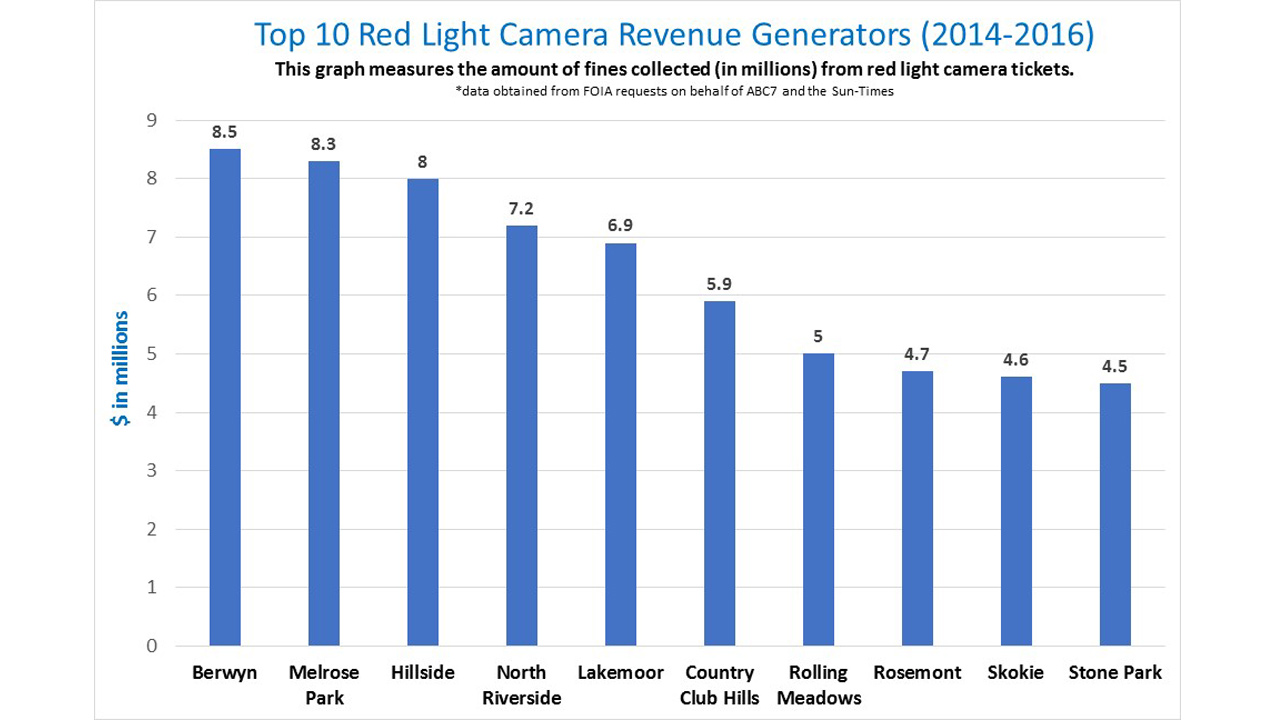 The investigation also found the majority of the top 10 used SafeSpeed cameras.

"I think it is the dedication to making sure we capture every violation," Lai said.

He said SafeSpeed is "more effective," but it was a SafeSpeed camera that snapped on Rick Koch. The court said he stopped.

"Originally I was going to pay it, get it out of my way," Koch said of his ticket in Melrose Park.

That's what most people do. The investigation found 95 percent of ticketed drivers pay up.

"We don't know how many people are getting tickets like this and that they didn't deserve to get and just not bothering to contest them," Mihalopoulos said.

The joint I-Team and Sun-Times investigation also found the suburban totals from red light cameras are now surpassing city of Chicago revenues. The city has about 300 red light cameras that generated $56 million in 2016.

The Chicago Sun-Times story is available online now, and will also be in Tuesday's paper. CLICK HERE to read it.