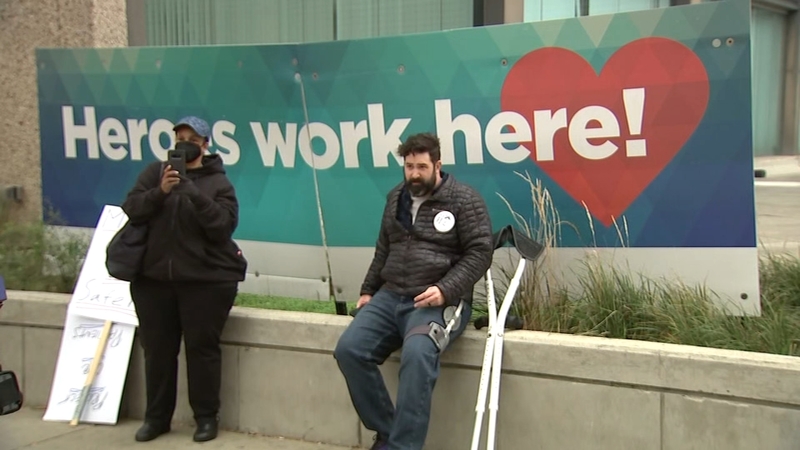 CHICAGO (WLS) -- Paul Pater sits outside UI Health's emergency room in the Illinois Medical District in Chicago, crutches at his side. He's perched in front of a sign that reads "Nurses are Heroes," but he doesn't much feel like one.

"This person was allowing me to do it, until the swab goes in and then he freaked out," Pater recalled.

Pater was attacked by an intoxicated patient as he administered a COVID test in August 2020. But he doesn't blame the patient for his injuries; he blames a lack of security personnel at the hospital.

"It's standard procedure to have a security officer next to you when someone who could potentially be violent or be potentially be self-endangering, be available," he said.

His case is not unique, according to others. ER nurses gathered to protest Tuesday, decrying what they said is an increasingly dangerous environment at UI Health, brought about in part by a severe staffing shortage. They are demanding more nurses be hired, and for higher wages be paid to those who are already there.

"I've been spat at. Hit in the face. Pushed into a wall. Each time, security and the police come after the fact," said Debreshia Anderson, ER nurse and union rep at UI Health.

A hospital spokesperson released a statement Tuesday saying in part, "UI Health has a robust security strategy to ensure that our environment is safe for staff, patients and visitors. This includes dedicated security staff in the ED and, unlike many hospitals, UI Health also has on-site police officers and metal detectors at ED entrances."

But safety concerns amongst health care staff are hardly unique to UI Health. According to a 2019 survey by the American Nurses Association, 595 of respondents said they had been verbally assaulted by a patient and 25% had been physically assaulted. Pandemic-related stressors are believed to only be making the situation worse.

"Everybody is under stress these days and the anxiety is pervasive," said Colleen Morley, American Nurses Association.