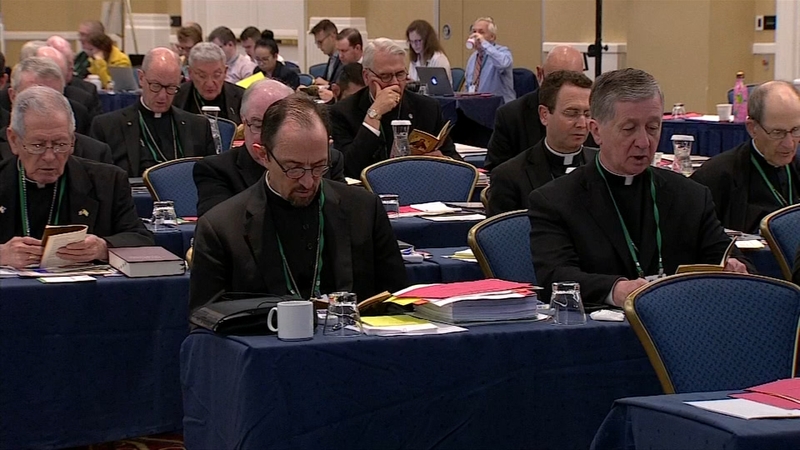 BALTIMORE, Md. (WLS) -- For the first time in their history, the nation's Catholic leaders voted Thursday on new rules that they themselves will be subject to if they are accused of abuse or misconduct.

U.S. Catholic bishops voted to create a new national sex-abuse hotline run by an independent entity, a decision that represents one of the church's most tangible steps yet in confronting its sex abuse crisis.

The hotline, which would field allegations that bishops committed abuse or covered it up, would take complaints by telephone and through an online link. It's supposed to be operating within 30 days.

Complaints will be received by a layperson chosen by a supervising archbishop who will then notify police or civil authorities, if appropriate.

A Church investigation is also initiated under the supervision of an archbishop and with assistance of lay experts. Results of the investigation are reported to the Vatican where Church officials including the Pope himself decide what final action to take, up to and including removing the offending individual from the priesthood.

The vote regarding the hotline was overwhelmingly in favor, credibility on the line, following recent cases of misconduct involving some bishops themselves. Holding bishops accountable sounds simple enough, but it took a global meeting in February at the Vatican and an order from Pope Francis to get this done.

Some are referring to the new rules as the "Cupich Plan," a nod to Chicago Cardinal Blase Cupich who played a key role in developing the measures approved by the Pope.

"I think that the document itself was so very clear about what we're going to do in concrete ways that I think it was very easy to adopt," he said. "There is a way that the Holy Father has given us a pathway forward to make sure that bishops and people together work on this."

But abuse survivors are concerned about oversight.

"I mean the idea of a hotline's good. But, again, where's that information going? Is it going to civil authorities? No; they're packaging it up and sending it to the Vatican," said Peter Isley, a survivor and founding member of SNAP, a survivors' network and advocacy group.

Cupich insisted that abuse accusations in Chicago go to law enforcement officials before Church officials. He's well aware that people will be watching for proof that this plan works.

"I think we should make sure that we hold people accountable - metropolitans as well as bishops and everyone else accountable - to make sure that we live up to what we promised and we said we would do here today," he said.
Report a correction or typo
Related topics:
religion & spiritualitymarylandblase cupichcatholic churchsex abuseu.s. & world
Copyright © 2022 WLS-TV. All Rights Reserved.
TOP STORIES
ISP trooper, woman ID'd after found dead inside parked car: police
Family of hospitalized 7-year-old girl encourages COVID-19 vaccination
Dad charged and fired from job after racist tirade posted on TikTok
Family continues to seek new leads in unsolved Naperville murder
What to know about stock market's recent ups and downs
Cause of death revealed for 23-year-old woman found dead after date
34 state prisons on COVID lockdown as cases soar
Show More
Illinois reports 9,462 new COVID cases, 81 deaths
Russia-Ukraine conflict explained
Activists fight for civil rights charges in murder of Laquan McDonald
Girl, 8, killed in shooting 'hoped for a better life,' family says
Tips for tax season
More TOP STORIES News