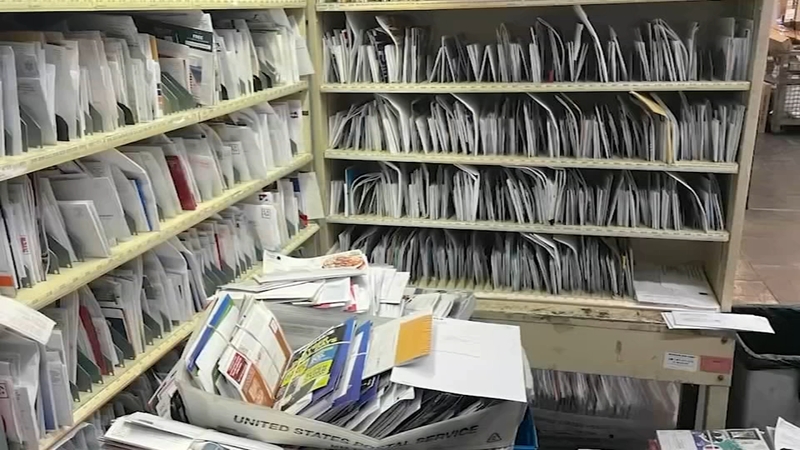 CHICAGO (WLS) -- The unprecedented volume of holiday mail sent by USPS this year isn't the only reason for persistent postal delays. Chronic understaffing and capacity challenges are the foundation.

Leon Paramore waited for nearly three weeks for a package sent by two-day Priority Mail. After endlessly tracking, several phone calls and even filing a claim, the package arrived Monday.

"Yesterday. That's correct. And it was sent out on the 10th. That's totally unacceptable," he said.

Paramore is no stranger to mail delivery issues, nor is he unsympathetic. A former postal manager himself, he understands the challenges the U.S. Postal Service faces. But he doesn't understand pictures like one taken at the Grand Crossing post office showing boxes of undelivered mail.

"There are times when I've gone to the Grand Crossing post office and they've told me the truth: 'We have no one for your route, if you want to pick your mail up we'll go get it,'" he said.

A spokesperson for USPS Chicago blamed delays on the record number of packages mailed during the holidays, fueled in part by the pandemic, saying, "Capacity challenges with airlifts and trucking for moving this historic volume of mail also lead to temporary delays. These challenges were felt by shippers across the board."

It's estimated that nationally some 3 billion packages were delivered between Thanksgiving and Christmas. Unlike private carriers like UPS and FedEx, USPS is not allowed to stop accepting packages.

"They have a universal mandate to handle whatever people give them," said Satish Jindel of ShipMatrix. "The accepted, on certain days, up to 6 million packages more than what their design capacity was."

Letter carrier representative Mack Julion said it all comes down to staffing, saying that whatever problems exist nationally are exacerbated in Chicago where vacations and sick calls are routinely left uncovered.

"There's a saying: When you fail to plan, you plan to fail," Julion said. "We knew Christmas was coming. We know we're in a COVID environment, and they should have been properly prepared for the onslaught of mail, and they were not."