Illinois deported Army veteran back in Chicago for citizenship hearing 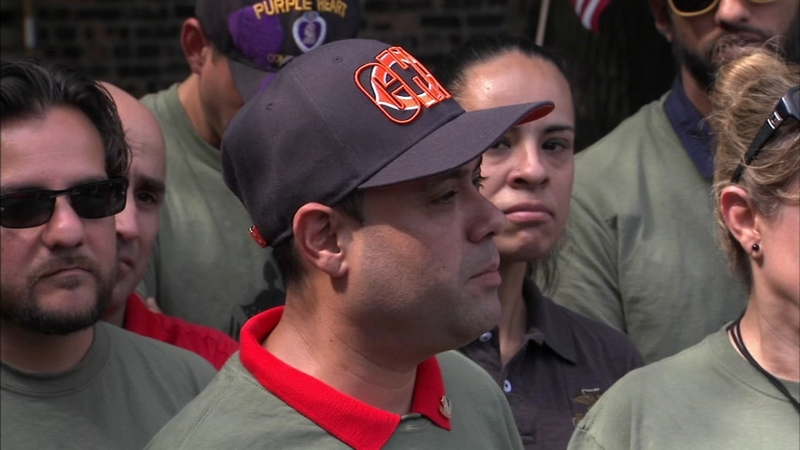 Deported Army veteran back in Chicago for citizenship hearing

CHICAGO (WLS) -- A U.S. Army veteran who was deported to Mexico is back in Chicago and faces a key hearing Wednesday morning as he fights to stay in this country.

Miguel Perez Jr., a 39-year-old veteran of the war in Afghanistan, is in Chicago on a two-week permit that's allowed him back into the country to attend a citizenship hearing scheduled Wednesday morning.

No decision was made at the hearing Wednesday . His attorney said they hope to have a resolution in the next week to two weeks.

"I am a little let down because the decision wasn't made today, but just have to wait a little bit longer, another hoop I got to jump through," Perez said after the hearing.

His story has garnered national headlines. Perez was deported to Mexico 18 months ago, after his original petition for citizenship was denied, the result of a 2010 drug conviction.

He served over seven-and-a-half years in prison. His green card status was revoked and he went from state prison into the custody of immigration officials.

Then, a few weeks ago, Governor JB Pritzker pardoned Perez, allowing him to appeal his case, and return home to his parents and two children.

Perez served in the U.S. Army Special Forces, deployed to Afghanistan twice in the wake of the 9/11 attacks. He returned with severe PTSD and he became addicted to drugs and then came his arrest.
RELATED: Citizenship denied for Illinois Army veteran fighting deportation

While the trauma is still there, he's hopeful this is the beginning of better things to come.