WLS
By Will Jones and ABC7 Chicago Digital Team 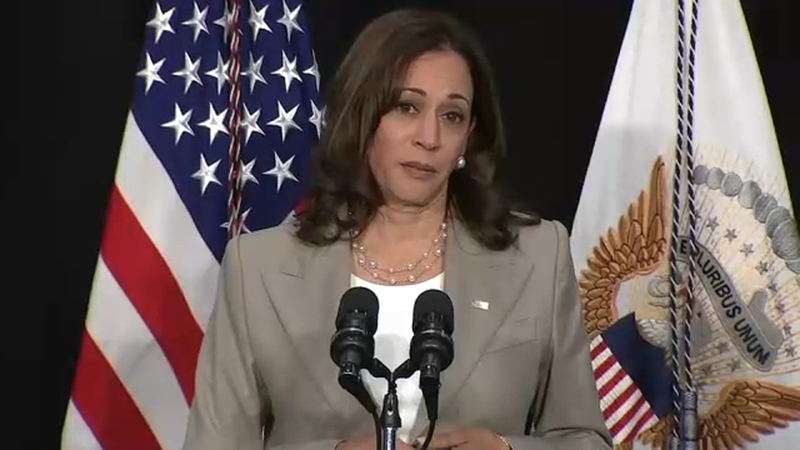 She was expected to join Democrats Senator Dick Durbin and U.S. Representatives Lauren Underwood and Robin Kelly in Plainfield to highlight efforts to address the maternal health crisis.

The vice president was aboard Air Force 2 and headed to Chicago when the Supreme Court decision came down.

Harris' remarks turned to the Supreme Court's decision to overturn Roe v. Wade. Abortion rights is a topic she has been outspoken about since a draft opinion was leaked last month.

"For nearly 50 years, we talked about what Roe v. Wade protects - protected," she said. "This is the first time in the history of our nation that a constitutional right has been taken from the people of America. And what is that right, some may ask? It's the right to privacy. Think about it as the right for each person to make intimate decisions about heart and home."

"We have lost some ground today when it comes to freedom in America," Durbin added.

Harris pivoted from her previously planned remarks on the Biden administration's plan to address the maternal health crisis. A Supreme Court ruling that some fear could have far reaching implications.

Harris was scheduled to meet with maternal health care providers before her remarks Friday afternoon but that didn't happen due to the abortion ruling.

"We are dedicated to protecting women's fundamental freedoms to make decisions about their own bodies," Underwood said.

The Democrats are hoping the abortion decision will drive turnout in November. Some voters say they're concerned about what other rights could be taken away.

"It is very disappointing, and frankly, frightening," said Will County Board Speaker Mimi Cowan.

"I am lesbian. I am very concerned about the implications for my family and families like mine," said Jessica Parks with the Will County Pride Coalition.

"This ruling is going to disproportionately affect women of color, those who don't have access already. We need to be expanding access," added community health educator Aishwarya Balakrishna.

Friday afternoon, she'll be in Chicago to speak at the 39th annual conference of the National Association of Latino Elected and Appointed Officials.

The event is billed as the nation's largest gathering of Latino policymakers and will be the first in-person conference NALEO has hosted since 2019.