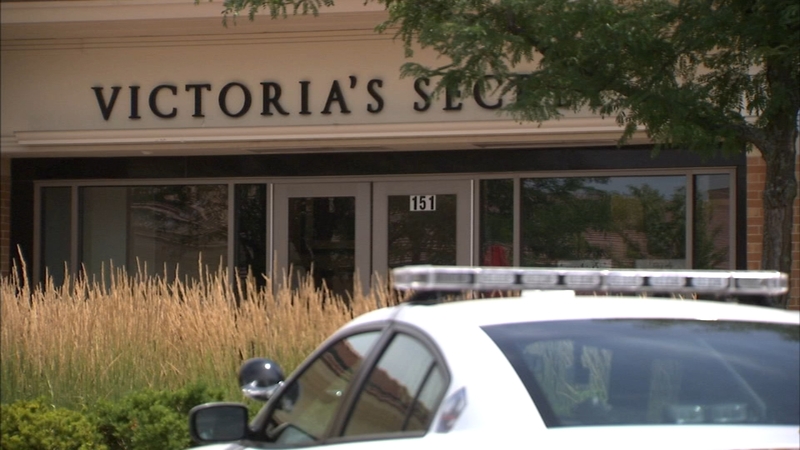 Police say the three women entered the store around 1 p.m. and took merchandise.

According to police, one of the women was carrying a stun gun or Taser and threatened an employee with it.

The incident was captured on store surveillance video.
The group later drove off in a silver SUV with temporary plates that may partially read "P952."

This is the second time this week that the store was robbed, though police currently do not believe the two crimes are connected.

The store is located in Town Square Wheaton, an outdoor shopping complex that includes more than 25 stores.

"I think it's surprising," said Hazel Koch, a Victoria's Secret shopper. "I would not expect that for this area at all. I consider it a safe area."

"It makes me think twice about shopping here," said Joanne Hawkins, another shopper who is also concerned about her daughter who works at a women's boutique in the complex.

The Hawkins women dropped by Town Square, even though Vanessa Hawkins was not scheduled to work. When she returns, however, the crimes will be on her mind.

"It does make me feel kind of unsafe," said Vanessa Hawkins, "because there are young kids and families that come in this area. It does make me scared for our safety around here."

The first incident happened Sunday. Police said burglars conducted a smash-and-grab raid at 4 a.m. Youker said the criminals got away with more than $5,000 worth of merchandise. Although there was a surveillance camera inside the store and despite releasing surveillance video of Tuesday's robbery, police will not release video related to Sunday's incident or discuss what it shows.

"We're keeping it pretty close to the chest at this point," Youker said.

Youker said police decided to release the surveillance video in Tuesday's case because the women were apparently armed and threatened an employee.

"The female presented what appeared to be a stun gun, that individual activated the stun gun, which caused the employee to retreat," Youker said.

Police say no one inside the store was hurt. Since the women used a weapon, they are now wanted for felony armed robbery.

Police said they have increased marked and unmarked patrols in the area. Youker said private security is left up to each individual store.

"The safety of our associates and customers is always our top priority. We will work closely with the police to prosecute to the full extent of the law," a spokesperson for L Brands said on behalf of Victoria's Secret.

"The safety of our tenants and customers is our top priority. We are fully cooperating with authorities on this matter but cannot comment further due to the ongoing nature of the investigation."