WILLOWBROOK, Ill. (WLS) -- People who live in Willowbrook are waiting for the green light to return so they can see just how badly damaged their homes are.

They were evacuated by DuPage County sheriff's deputies who were called to the apartment complex on Honeysuckle Rose Lane after its roof blew off Tuesday around 2:40 p.m. The Red Cross is helping 130 people who are temporarily homeless because of the damage to that building.

"I started hearing all the loud noises, and my initial response was to grab my kids and get out," said Giovanna Johnson, who lives on the top floor. "We ran out of the house and it was raining really hard, so we all got soaking wet and they('re) telling us we can't even go back in."

Johnson and her children were among 20 people housed Tuesday night by the Red Cross at Benedictine University in Lisle. As of Wednesday afternoon, three families are still receiving help from the Red Cross. There's no word yet from either the apartment management company or the building and zoning department as to when residents will be allowed back in.

In Forest Park, the storms damaged a cemetery next to a mall, ripping up grave markers and headstones.

In Berwyn, one family is thankful an 81-year-old man wasn't hurt when winds toppled a tree onto the roof of his house, crushing part of it.

"I was just praying that he wasn't underneath anything, that he was still breathing and with us," said son Glenn Chavez. "It could have been really damaged. He could have seriously been injured. I'm just thankful that he wasn't."

Berwyn residents called in more than a dozen reports of trees down. Firefighters responded with chainsaws even before the storm had passed to clear one tree from a street.

Thankfully, there are no reports of any serious injuries from the storm.

Planes destined for Midway Airport were not permitted to take off from about 4:30 p.m. to 5:30 p.m. Tuesday due to the weather. Delays lasted about 20 minutes. At O'Hare International Airport, delays were about an hour at about 6 p.m. Tuesday.

The areas around Willowbrook, Berwyn and Forest Park likely suffered straight-line wind damage, with likely wind gusts 50 to 60 mph, according to the National Weather Service.

In west suburban Forest Park, about six or seven vehicles sustained major damage when winds blew both an air conditioning unit off an Ultra Foods store and a portion of the Blue Monkey t-shirt store, according to police. Several grocery store patrons were loading groceries into their vehicles at the time. Several trees were downed in the village.

In Berwyn, village officials responded to several weather emergencies. One resident said there were several trees down on cars, garages and homes near 16th Street and South Oak Park Avenue. 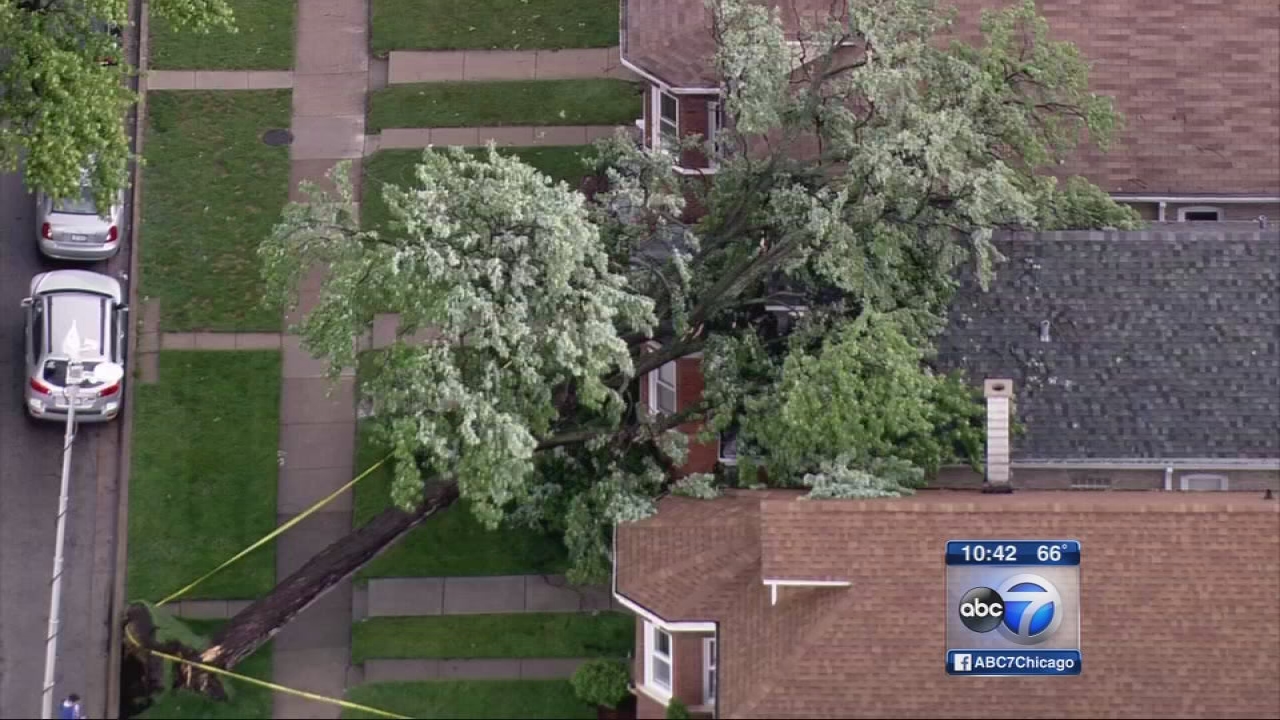