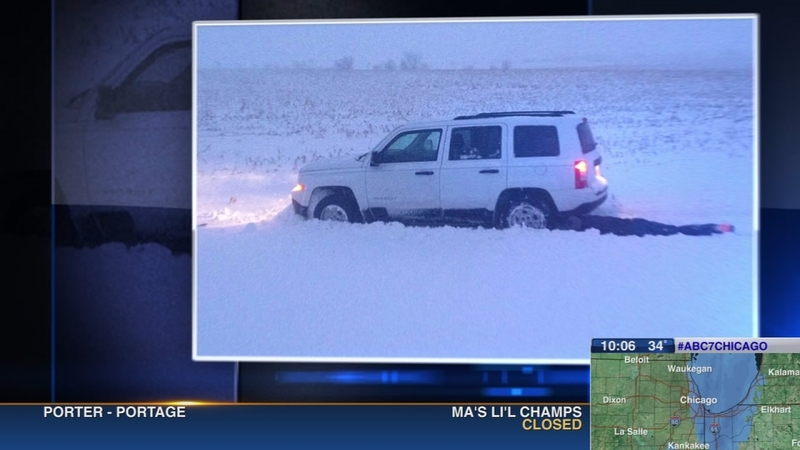 CHICAGO (WLS) -- Wet, heavy snow and fierce winds created blizzard-like conditions in northwest Indiana and the far south suburbs Wednesday, though the evening commute was spared the worst of the weather.

Winter storm warnings and winter storm advisories for Cook, Will, DuPage, Kendall and Grundy counties were cancelled shortly before 9 p.m.

Snowfall varied widely across the Chicago area. South and southwest suburbs saw several inches, while the snow was barely sticking in the city proper.

On I-57 slightly north of Monee an 18-wheel trailer hit an IDOT truck that was helping a motorist. No one was injured, according to an IDOT spokesperson.

Tractor-trailer on its side after hitting iDot truck on shoulder pic.twitter.com/H8tl4XXbCK

Truckers enjoying a hearty meal at the Iron Skillet further south at I-57 and I-80 felt the roads were treacherous.

And one woman's son who came to pick her up in University Park got waylaid by the snow, extending her post-train travel time to 90 minutes. Slightly east in Crete, where snowfall hit five inches, the mayor offered simple and timeless advice: stay off the roads.

Chicago Streets and Sanitation deployed 300 plows to main routes and Lake Shore Drive to help through the evening commute.

Snow picked up around rush hour in the southwest suburbs, where about 6 inches fell in Richton Park and 4 inches fell in Kanakakee. Strong winds and slushy roads create difficult conditions for divers.

"The roads are slippery in certain spots, there are drifts along the way on 17, so some drivers are speeding, you need to really go slow," says Shana Shepherd.

"It's hard to see, not too bad though. I guess if you're used to driving in this it's not terrible," says Kristen Rittenhouse.

As temperatures fall quickly into the 20s overnight, there is a real danger that wet roads will become icy.

High winds caused wild waves in Lake Michigan and on the lakefront. Barricades were blown over and joggers made U-turns as wind whipped waves higher. But that didn't stop them from coming down altogether.

"Wind's in your face, you got the storm coming down... it's pretty cool," says runner Mike Richlak.

Bikers ever rode down with specialty gear.

"I know if I take them off-see. I was going to wear regular glasses but I was like, no, I'm going to wear these," said cyclist Ernesto Martinez.

One runner was blown off a sidewalk on the Museum Campus.

"This is ice," says runner Kirk Kvist. "It's almost like getting your face sandblasted while you're out running in this."

Chicago's skyline was nearly blotted out by the clouds, and the powerful winds impressed residents across the city.

"I knew today would be pretty violent, pretty like amazing. I didn't know it would be this windy. Pretty incredible," said Marcella Wilkinson, who was on the South Side's Promonotory Point.

"It literally blew me away," said Chris Sawyer, a Hyde Park resident, of the winds. "It's impressive, particularly on a day like today."

Chicago Department of Buildings officials urged real estate and construction workers to exercise caution Wednesday and said building inspectors will be on hand to respond to any incident reports.

Dozens of schools in those areas are closed Wednesday due to the Blizzard Warning. View the latest Chicago-area school closings HERE. All Southwest Airlines flights out of Midway canceled Wednesday