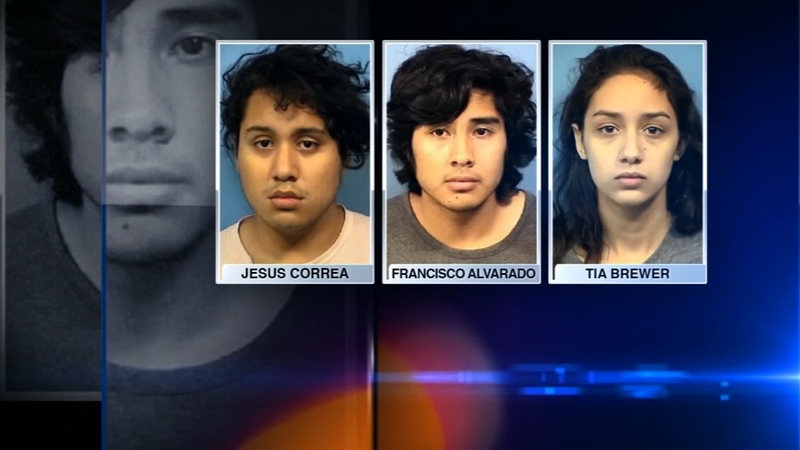 WEST CHICAGO, Ill. (WLS) -- Three people have been charged after prosecutors said a man was stabbed, set on fire and run over in West Chicago on Monday.

Berlin said a third person, Jesus Correa, 18, was asked to provide gasoline used to set the victim on fire. Correa observed the body in the fire pit when he got to the scene and later saw the fire pit go up in flames, Berlin said.

"The facts alleged are brutal and heinous and evidence of an unconscionable degree of depravity," Berlin said.

Prosecutors announced charges against three people in connection with the murder of a man found burned in a field in West Chicago Tuesday.

Alvarado and Brewer were both charged with first degree murder, armed robbery and concealment of a homicidal death. In a court appearance Thursday, both were denied bail.

Correa has been charged with concealment of a homicidal death. His bond was set at $100,000.

Guerrero's body was discovered at about noon on Tuesday in the 1300-block of Joliet Street. Police said the parents of one of the suspects who lives near the field told them about blood on their Jeep.

After speaking with Correa, he directed police to a motel in Chicago, where they located Alvarado and Brewer. Berlin said items from the victim, including a bloody backpack which contained a bloody knife and screwdriver, were found in the motel room.

Police said that the victim had been in a dating relationship with Brewer and that Brewer is currently dating Alvarado. Police said Brewer and Alvarado planned the murder because Brewer claimed Guerrero raped her when they dated previously.

"They've not located any reports of a complaint of any sexual assault or rape," Berlin said.