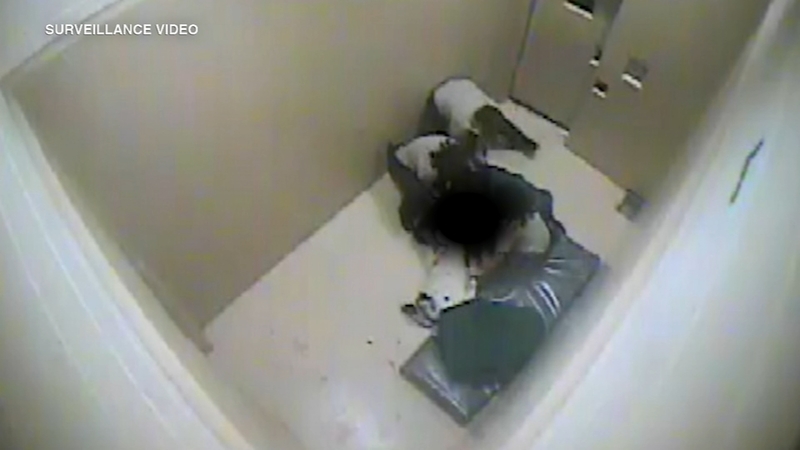 LASALLE COUNTY, Ill. (WLS) -- A woman is suing LaSalle County Sheriff Thomas Templeton and several deputies, claiming she was left naked in a jail cell for 12 hours, according to her attorney.

Video provided by the plaintiff's attorney shows the 28-year-old Zandrea Askew crying and screaming after being brought down to the floor by deputies who then remove her clothing.

The incident happened in January 2017 at the LaSalle County Jail after Askew was arrested for DUI and resisting arrest. The charges were later dropped. Terry Ekl, who represents Askew, said his client was arrested after passing a field sobriety test.

In the video, Askew, a former Marine sergeant, is seen refusing a pat down search before being brought into a padded cell where she refuses to undress. That's when deputies take action, bringing her to the floor.

When the deputies are done stripping her and she is naked, she is given a blanket and left in the cell. Her lawyer said she remained that way for the next 12 hours.

Illinois law does allow for strip searches when someone is suspected of hiding weapons or drugs, but Ekl said Askew had already been searched twice by the arresting officer and at the sheriff's department prior to being taken to the jail.

"They did what they did to her because she wouldn't answer their questions. Plain and simple. She was defying their authority. Therefore, they wanted to humiliate her to get her to do what they wanted by ripping her clothes off," Ekl said.

"You cannot strip people and treat them like animals because they're defying your authority," Elk added.

This isn't the first time the LaSalle County Sheriff's Department has been sued over a strip search. In 2014, after paying hundreds of thousands of dollars to settle a federal lawsuit brought by women who were strip searched in the jail, the department agreed that forcible removal of clothing would only be conducted "as a last resort."

A spokesperson from the sheriff's department declined to comment Tuesday on the recommendation of attorneys.

On Wednesday, a lawyer for Lasalle County issued a statement that read: "As this lawsuit was filed late last evening, I am just now reviewing the allegations contained therein with my clients and will respond after having an adequate chance to review. At this time, it our intent to vigorously defend our position in federal court, and we look forward to presenting all of the evidence pertaining to this matter, rather than the snippets of video released by the media."
Report a correction or typo
Related topics:
lasalle countylawsuitcaught on video
Copyright © 2021 WLS-TV. All Rights Reserved.
TOP STORIES
FOP pres. posts video after ordered not to talk about vaccine mandate
Man, 55, shot in Wicker Park amid robbery attempt near 6 corners
COVID tops cause of death for police for past 2 years
Pritzkers made $5.1M last year, tax records show
State trooper hit by DUI driver on I-90, police say
Open House Chicago offers exploration of 100+ architecture
Mom delivers 14 lb. baby after suffering 19 miscarriages
Show More
Chicago Sky take 2-1 lead over Phoenix Mercury in WNBA Finals
2 CPD officers, woman injured in hit-and-run in Austin
Breast cancer awareness 5K set to start at Soldier Field
Gunman shoots 3 Texas deputies from behind, killing one: police
Booster shots outpacing new COVID-19 vaccinations in Indiana
More TOP STORIES News