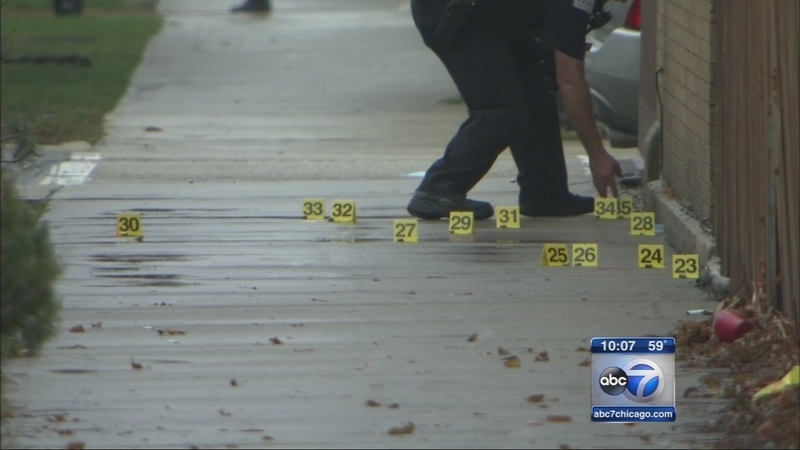 CHICAGO (WLS) -- Police are investigating a shootout in the Wrigleyville neighborhood after officers say they showed up to two groups firing on each other.

The shooting has left those who live in the normally peaceful neighborhood stunned.

"It was a gun battle in the middle of the street," said Jermaine Shepard. "That's crazy for Wrigleyville."

Over 80 gunshots were exchanged in the 1100-block of W. Patterson, a staggering number made even worse by the fact that it happened just one block away from Wrigley Field. On Sunday, police investigators spent hours on the scene collecting shell casings and talking to residents who initially thought they were hearing fireworks when it all started around 3 a.m. Sunday.

Police responded almost immediately. They say two officers who were already in the area ran in the direction of the gun shots only to find two armed men running towards them. Each officer fired once but missed.

The men dropped their weapons and fled, but more people appear to have been involved, including one who crashed into several parked cars as he made his getaway.

The badly damaged Dodge Charger was later found abandoned near Montrose and Clark. A 26-year-old man was injured in the shootout.

"I heard there was a party going on," said Kelly Frank, whose car was damaged in the incident. "Someone who was not invited was here (and) there was an altercation."

For her part, Kelly considers herself lucky. Her parked car was riddled with bullets.

"Better my car than me," she said. "I'm glad no one in the neighborhood was hurt."

The injured man is in serious condition at St. Francis Hospital in Evanston, where it appears he took himself. It remains unclear if he was involved in the shootout, but some residents said he was a guest at the party where the incident may have started.