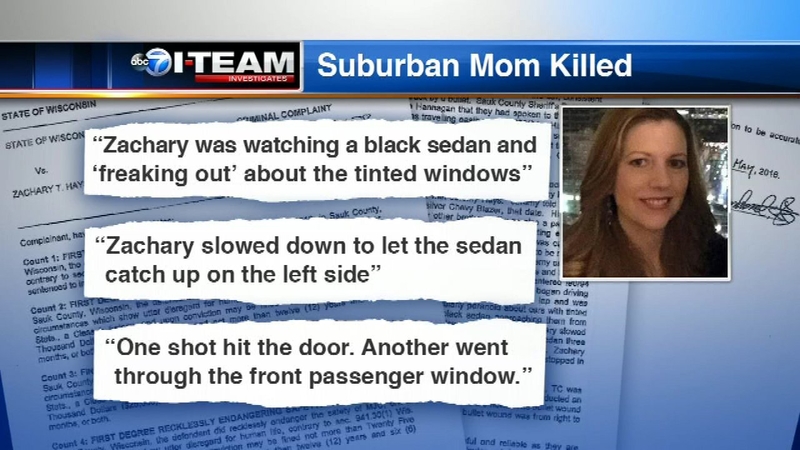 WEST ALLIS, Wis. (WLS) -- There's new insight into the apparent bizarre motive behind the random shooting that killed a suburban mom on a Wisconsin highway. The I-Team obtained documents detailing what lead up to the attack.

A 20-year-old man is charged in connection with the shooting death of a mother of two from north suburban Buffalo Grove.
EMBED More News Videos

A 20-year-old man has been charged in connection with the shooting death of a mother of two from Buffalo Grove on a Wisconsin highway.

He is also suspected of killing a man hours earlier in suburban Milwaukee. Authorities say Hays kicked down the front door of his downstairs neighbor's apartment early Sunday morning, then shot 42-year-old Gabriel Sanchez, killing him. Neighbor Jesse Awonohopay is still trying to make sense of it.

"It's pretty surreal. I just can't believe it," said Awonohopay.

Hays and his older brother live right across the hall from Awonohopay.

"They would come over to my place, we would have a couple beers, I'd go over to their place. They were really friendly," Awonohopay said.

Police say after killing Sanchez in West Allis, the two brothers apparently picked up a third brother and drove to the Madison area and were near Wisconsin Dells when the suspect fired into another vehicle, hitting Tracy Czaczkowski, 44, of Buffalo Grove in the neck. She died Tuesday.

A mother of two from north suburban Buffalo Grove died Tuesday after a drive-by shooting on a Wisconsin highway.

According the criminal complaint filed Wednesday afternoon, Zachary's brother Jeremy told police Zachary was acting paranoid since smoking marijuana a couple days earlier and he driving with a .45-caliber handgun in his lap.

According to the complaint, "Zachary was 'freaking out' about the tinted windows on the sedan... Zachary slowed down to let the sedan catch up on the left side... Zachary then shot at the black sedan three times."

Police have offered no motive at this point for either shooting.

"Never had a beef with him, I never saw him arguing with anybody. They were nice kids," Awonohopay said.

The charges against Hayes were filed in Sauk County, but more charges are still expected for the murders in West Allis.

Hayes remains hospitalized in Madison after being shot by police on Sunday. Police said his injuries are not life-threatening.