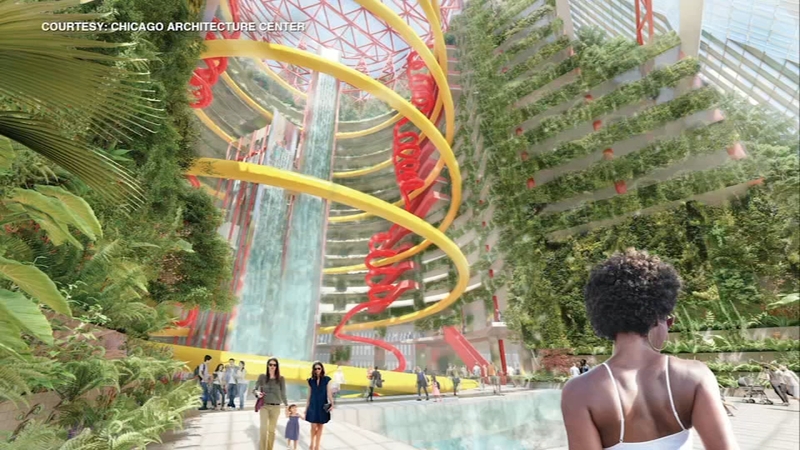 Could the Thompson Center become a waterpark?

CHICAGO (WLS) -- The Chicago Architecture Center has revealed the finalists in its "reimagine" the Thompson Center contest, which include a hotel, a shopping center and even a waterpark.

"The design proposals turn the space into a new civic center with a state-of-the-art glass facade, a mixed-use development with an open-air park on the ground floor, a new Chicago Public School, a hotel and indoor waterpark, an urban farm, an art and civic culture destination with imaginative spaces suspended in the atrium, and a conical skyscraper skinned as a 3D LED screen," said Elva Rubio, Chicago Architecture Club co-president.

"The competition seeks to give the building new life through restorative architecture while preserving its architecture and public character," the contest organizers said.

The winning design proposal will be announced Sept. 14 at the opening of a pop-up exhibit featuring the winning and finalists' designs on view at the CAC through October.

The sale and possible demolition of the Thompson Center has been controversial among Chicagoans and architecture and design professionals around the world.

Despite the toll caused by lack of maintenance, Helmut Jahn's design of the Thompson Center is prized by the design world as a unique example of post-modern architectural design in a civic building meant to draw citizens into the daily workings of government, the contest organizers said.

The competition is separate from the state's request for proposals for the site, which is slated to hit the market next year.