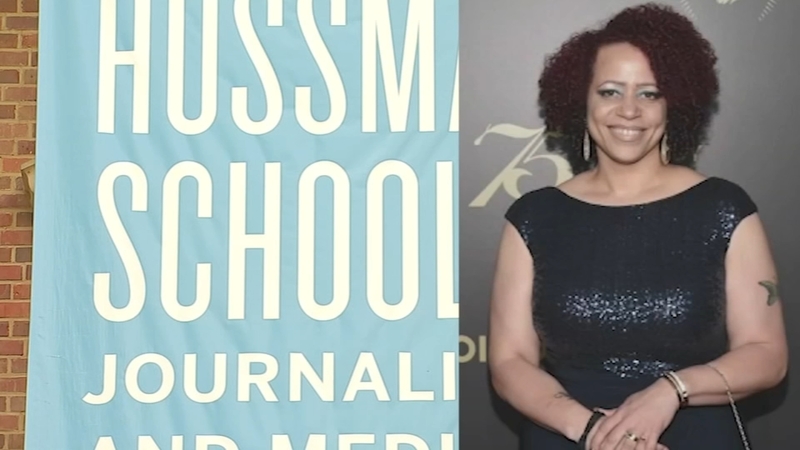 CHAPEL HILL, N.C. -- Nikole Hannah-Jones will not come to UNC after her employment became a national controversy.

Hannah-Jones made her announcement on "CBS This Morning" during an interview with Gayle King.

"I've decided to decline the offer of tenure. I will not be teaching on the faculty at the University of North Carolina at Chapel Hill," Hannah-Jones said.

She went on to say that she would instead be the inaugural Knight Chair in Race and Journalism at Howard University.

Hannah-Jones was selected in 2020 to join the UNC faculty as the Knight Chair in Race and Investigative Journalism--a position that has previously come with tenure.

One side of North Carolina legislature calls it a lesson to make people feel guilty about their race while the other side calls it an opportunity to find a solution to a problem.

Hannah-Jones went through the extensive tenure process, passing each step until her tenure application was set aside by UNC's Board of Trustees.

"I went through the official tenure process and my peers in academia said that I was deserving of tenure. These board members are political appointees who decided that I wasn't."

The board has the final approval vote of all tenure applications. Its delay in voting on Hannah-Jones' application was reportedly due to controversy surrounding the 1619 Project.

That piece of journalism won her the Pulitzer Prize, but it has since become the target of conservative activists who claim it seeks to re-write American history in a negative light. Supporters of the project argue that it looks at American history in a more accurate and complete way, by calling attention to how the United States has failed its Black citizens for generation after generation.

"It's pretty clear that my tenure was not taken up because of political opposition, because of discriminatory views against my viewpoints, and I believe my race and my gender." she claimed.

Hannah-Jones said to this day no UNC official on the board of trustees has reached out to her or given her any indication on why her tenure vote was denied in November and January board meetings.

"This (UNC) is my alma mater. I love the university," Hannah-Jones said. "The university has given me a lot and I wanted to give back. It was embarrassing to be the first person to be denied tenure. It was embarrassing and I didn't want this to become a public scandal. I didn't want to drag my university through the pages of newspapers because I was the first and only Black person in that position to be denied tenure."

"I worry about the controversy of tying the UNC journalism school to the 1619 Project," Hussman wrote in an email last December.

After delaying for several weeks, and throwing UNC in the national spotlight, the board of trustees voted 9-4 to approve Hannah-Jones' tenure.

Hannah-Jones said that was her victory. She fought to get her tenure vote heard and now she's ready to move on.

"It's not my job to heal the University of North Carolina," she said. "That's a job of the people in power who created this situation in the first place."

She said she's excited for her future at Howard University and pushed back against anyone saying she could do more good outside of a historically black university that already understands her struggle.

"I have been very very thoughtful about my decision to go to a historically black college," she said. "What I've decided is since the second grade when I started being bused into white schools, I spent my entire life proving that I belong in elite white spaces that were not built for black people. I just decided--you know I got a lot of clarity through what happened with the University of North Carolina -- I decided I did not want to do that anymore. That black professionals should feel free -- and actually perhaps an obligation--to go to our own institutions and bring our talents and resources to our own institutions and help bring them up as well."

Howard University issued a statement on Hannah-Jones and also on Howard alumnus Ta-Nehisi Coates , who also was added to the faculty.

"It is my pleasure to welcome to Howard two of today's most respected and influential journalists," said Wayne A. I. Frederick, president of Howard University, in a statement. "At such a critical time for race relations in our country, it is vital that we understand the role of journalism in steering our national conversation and social progress. Not only must our newsrooms reflect the communities where they are reporting, but we need to infuse the profession with diverse talent. We are thrilled that they will bring their insights and research to what is already a world-class, highly accomplished team of professors."

Our America: The HBCU Experience Special

Susan King, the Dean of the Hussman School of Media and Journalism at UNC, who Hannah-Jones specifically commended for her integrity during the tenure process said she was disappointed that Hannah-Jones would not be joining the UNC faculty.

"Hannah-Jones is an alum of our school and a loyal Tar Heel. We will call on her to continue to challenge and inspire our students from her new position. We wish her nothing but deep success and the hope that UNC can learn from this long tenure drama about how we must change as a community of scholars in order to grow as a campus that lives by its stated values of being a diverse and welcoming place for all," King said in a statement posted here.

Other faculty at the UNC journalism school had more harsh words to describe the loss of Hannah-Jones: "It was racist."

"We support Ms. Hannah-Jones's choice. The appalling treatment of one of our nation's most-decorated journalists by her own alma mater was humiliating, inappropriate, and unjust," the statement said.