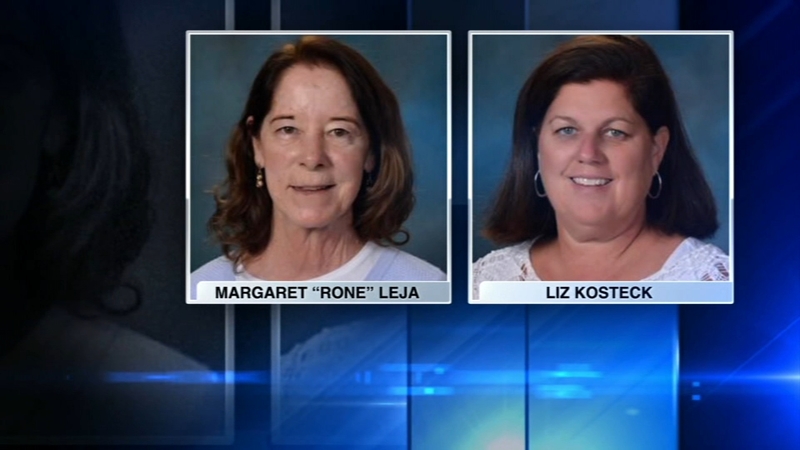 When officers arrived, two victims were found and transported to Silver Cross Hospital.

McCarthy said although others were on the scene to help the victims, there were no actual eyewitnesses to the crime.

Police also confirmed the suspected vehicle was leaving the same restaurant as the two victims.

"The vehicle came out of the parking lot of the Square Celt restaurant, made a left turn going westbound and struck the two women," said McCarthy. "The driver of the car should've seen these people and should have avoided them. There was no reason for this accident whatsoever."

One of the women, later identified as 61-year-old Margaret "Rone" Leja, died from her injuries, police confirmed. The second woman, 54-year-old Elizabeth Kosteck, was treated for her injuries and released from the hospital Thursday morning. Her family said she does not remember anything that happened during the crash.

The St. Michael School in Orland Park confirmed both women were teachers at the school and were leaving the parish Christmas party when the accident occurred.

"We've lost our own and it's a very hard thing for us. Ms. Leja was very important and work closely with the students in their technology needs and the teachers as well," said St. Michael School Principal, Paul Smith. "It's hit our entire parish very hard."

Leja was the school's technology teacher. Kosteck is a third grade teacher at the St. Michael School.

"Rone was absolutely wonderful, she was so kind and loving to everybody and she really made a huge impact on our students," said St. Michael School Assistant Principal, Maureen Morrissey. "She was friendly, she was warm and she will be absolutely, dearly missed."

"I have a very heavy heart," said Jan Brown, Leja's friend and neighbor. "I will miss her."

"I was absolutely shocked, and I honestly couldn't believe it," Morrissey added. "I mean, we were literally just together 10 minutes prior."

Brown is also an educator, and was friends with Leja for more than 20 years. Together they were passionate about creating projects for students.

"The things we built, and we tried and failed by trial and error," Brown recalled. "Just the joy from each others' lives, and also the sadness."

Rone's impact was also palpable at other schools where she taught, like Marian Catholic High School where she worked from 2010 to 2016.

"Whatever she believed or felt, she believed it 100%, and that was so great," recalled Marian Catholic Principal Steve Tortorello. "There was a fire and an energy to what she brought to the students and the curriculum."

Leja was not married, but is survived by her friends and community of educators who love her dearly.

McCarthy confirmed police are working on significant leads in the case, but said police could not provide further details at this time.

"We have gathered and will continue to gather multiple videos from stores, field cameras in the area. We have significant leads already that we are working on," said McCarthy. "All we can say right now is that it's a 'light vehicle', we have to do a lot of enhancement, a lot of stores were closed at the time."

"We have video of the vehicle coming out of the parking lot," McCarthy said. "Alot of work today but we have leads in the case."

Two teachers were struck in an apparent hit-and-run Wednesday night near Orland Square Mall, police said. One later died from her injuries.

It is with great sadness and shock that I send this message. This evening after our Parish Christmas party Mrs. Kosteck and Ms. Leja were walking to their cars and were struck by a vehicle. They were taken to the hospital and while Mrs. Kosteck sustained injuries, Ms. Leja passed away. The faculty and parish priests are currently at Silver Cross hospital gathered in prayer for our colleagues.

In light of this event, we will have a 9 am start tomorrow, Thursday. Because of this, there will be no morning bus service. Our faculty is grieving the loss of their dear friend and colleague and will be gathering privately before school opens.

Upon the children's arrival, we will have a prayer service led by Fr, Frank.

We ask for your prayers in this time of sorrow. We will continue to keep you updated throughout the day.