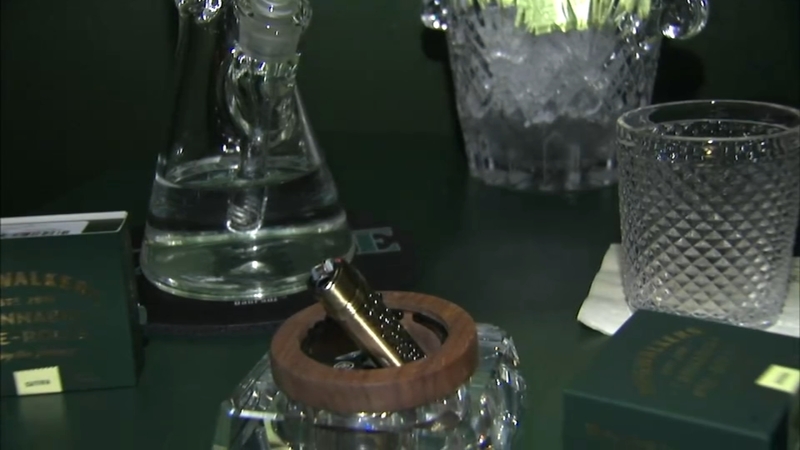 MUNDELEIN, Ill. (WLS) -- A new cannabis lounge in Mundelein held its grand opening Wednesday for 420 day, a special informal holiday for many people who use it as a chance to kick back and relax

The new cannabis lounge at the Rise Dispensary is kind of like a bar, but suited just for smokers.

"Relax, smoke a little something, put something in the air, put your pains behind you," customer Jarred Hamilton said. "It's a beautiful thing."

That's the new norm in Illinois, with smoking recreationally in shops across the Chicagoland area. The legalization of marijuana has opened the door for lounges the one in Mundelein, allowing cannabis consumption on site.

"Where we are now is really the first of its kind east of the Mississippi," Ben Kovler, Green Thumb Industries CEO said.

Wednesday, hundreds of people took advantage of the 420 holiday stopping by the dispensary for to go orders or for reservations at the "smokeeasy." It's an informal holiday and one that many people never thought they'd celebrate legally.

"Nobody ever did," Hamilton said. "They thought they'd just be trying to get some trees on the low, put it on the pocket and walk away."

"It's OK... it's OK now and everybody is okay to come out and say, 'This is what I do and it helps and it's fun and it's better than a lot of alternatives,'" customer William Lyles said.

The legalization of marijuana has also been a massive money maker for Illinois.
According to the state, more than $360 million in cannabis has been sold in the first three months of this year. That comes after more than a billion dollars in sales throughout 2021.

"It seems pretty obvious to us that cannabis should be part of the American experience and it's up to us to bring and show and do it right ,so that's what we're doing," Kovler said.

They're open until 10 p.m. and the lounge and "smokeeasy" is fully booked for Wednesday, but reservations can be made online for other days.