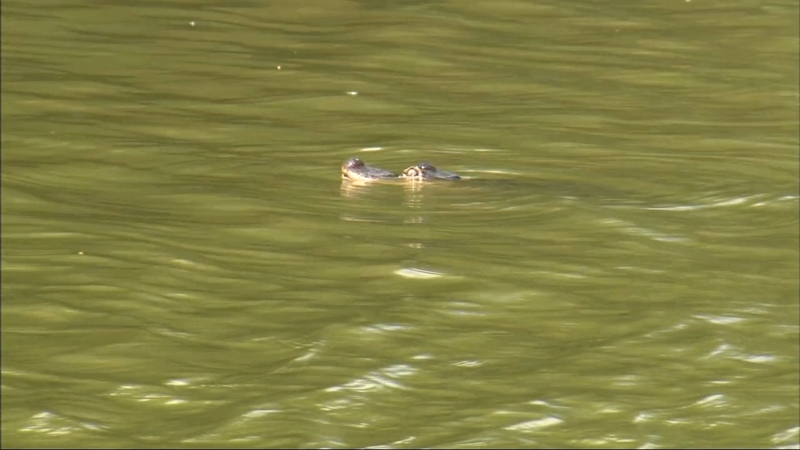 CHICAGO (WLS) -- The search for the alligator living in the Humboldt Park Lagoon continued Wednesday.

The alligator was first spotted Tuesday morning, and peeked its head out of the water during the ABC7 10 p.m. news. The alligator surfaced again Wednesday morning before going back in hiding.

WATCH: The search is on for the alligator spotted in the Humboldt Park Lagoon
EMBED More News Videos

The search for the alligator living in the Humboldt Park Lagoon continued Wednesday morning.

Alligator Bob, of the Chicago Herpetological Society, has been setting humane traps for the four-foot gator, who has been playing hard to get.

"We have some traps out there with assorted baits in it," he said. "They haven't been successful, but anybody who's ever fished a fish knows it's not a successful operation each and every time, especially when looking for a specific fish."

"I think it's smarter than we're giving it credit," said Sam Alcarez. "Alligators and crocodiles have existed for millions of years virtually unchanged by evolution. They've outsmarted nature time and time again. I think it's pretty easy for them to outsmart human beings as well."

Photographer Rencie Horst-Ruiz was out on the lagoon with a client around 6:15 a.m. Tuesday when her client spotted what they thought was an alligator in the water. Horst-Ruiz said when she looked down, she saw it too.

"We want to ensure that the alligator, likely being kept as a domestic pet, is safely captured and brought to a facility where it can live in a suitable environment. It is illegal to keep an alligator as a pet in Illinois, and it is certainly illegal to release it into a public lagoon," said Kelley Gandurski, Executive Director of CACC. "People buy baby alligators thinking they are cute, only to realize that they will grow to be up to 500lbs (if male) and may become dangerous. Please do not buy an alligator, and if you have an illegal pet in Chicago, please contact CACC so that we can help you responsibly place the animal in a more suitable environment."

Throngs of onlookers have flocked to the Humboldt Park lagoon hoping to catch a glimpse of the gator, which isn't helping search efforts either.

"Every time he sees somebody he dives, so the more people that come here looking for him the less we're going to see him," Alligator Bob said.

So far, he said, the gator seems to be hanging out in the same central location. More traps are being set, but the mission could prove a test of patience for man vs. nature.

"After he's been here for a week or so he's going to go exploring all over, looking for a place to bask, looking for new food, a better place to sleep," Alligator Bob said.

It's unclear how long it will take to catch the alligator, but the plan is to take it to a zoo.

Onlookers have been told to stay away, but the novelty of the creature is magnetic for people like Beth Lacey.

"I've seen turtles and Canadian geese and all that, but nothing that looks like an alligator," she said.

Visitors are being asked to stay away from the water until the alligator is recovered.

"We've had undercover conservation officers patrolling to keep an eye on things because it is an animal that could potentially cause problems," Alligator Bob said.

A separate police investigation into who released the alligator into the lagoon is ongoing.