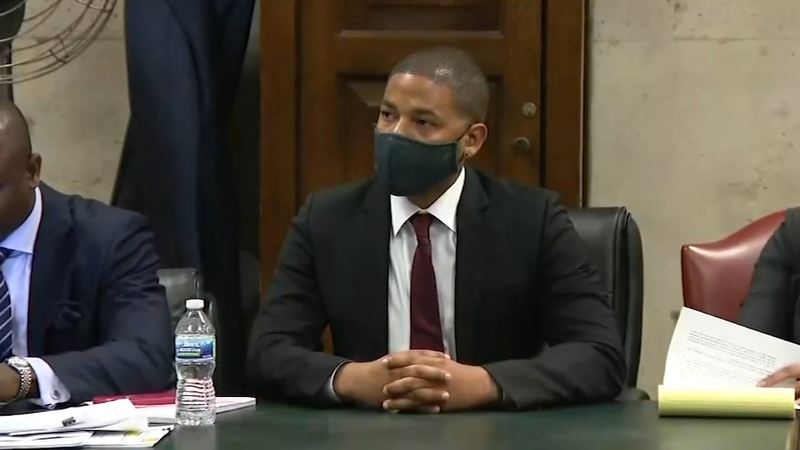 Jussie Smollett in 'psych ward' with 'no special treatment': family

CHICAGO (WLS) -- Four days into a 150-day sentence, Jussie Smollett remains in protective custody at the Cook County Jail. And his family remains steadfast in their support of the former TV star who was convicted for lying to police about a hate crime hoax.

In an emotional outburst after Judge James Linn announced Smollett would be taken to jail at the end of his sentencing hearing Thursday, the actor rose from his seat and announced repeatedly that he was "not suicidal."

"And if anything happens to me when I go in there, I did not do it to myself. And you must all know that," Smollett said before he being led from the courtroom.

"It's a very angering situation," said his brother, Jocqui Smollett. "It's been a complete mental marathon for him and my family, but he is very strong, he is very focused."

Smollett's youngest brother visited him Sunday at the jail where Smollett is in a cell by himself and being monitored in the medical wing.

Jocqui Smollett added, "We are just focused on getting our brother out of jail. He should have never spent a day in jail."

Smollett's attorney filed an emergency motion to get Smollett out of jail, attaching an affidavit from a doctor saying COVID poses a health risk to Smollett.

His family also fears the potential of an attack in prison. They say they have been receiving threats about Smollett on social media on via phone.

His brother tells us the relative listed as an emergency contact at the jail got a threatening call. The Smollett family shared one voicemail that is so graphic, using racial and homophobic slurs, ABC7 is not airing the sound.

"We are up against serious, homophobic people, serious racists," Jocqui Smollett said. "It's clear in the threats that we get. I get all types of nooses DM'd to me, all types of pictures of my brother with a noose around his neck."

The special prosecutor has time to respond to the Emergency Motion before an appellate judge rules on whether Smollett should be released from the jail.

The motion includes a long list of issues to be raised when his full appeal is filed, including that Special Prosecutor Dan Webb was improperly appointed after Smollett had reached a controversial deal with State's Attorney Kim Foxx's office to dismiss the case shortly after he was charged in 2019.

Smollett was found guilty in December on five counts of disorderly conduct for making false statements to police when he reported he was the victim of a hate crime attack near his Streeterville apartment in 2019. The case attracted international attention, with the openly gay, Black actor days after he was assaulted giving an interview on Good Morning America that included a tearful account of being attacked by two white men who shouted racist and homophobic slurs as they hit him and looped a noose around his neck.

A massive Chicago Police investigation that ensued eventually determined that Smollett hired his personal trainer and the trainer's brother, both of whom are Black, to stage the attack as a publicity stunt.

Veteran defense attorney Richard Kling said that appeal bonds are relatively rare and are granted only when issues raised for an appeal seem strong enough to overturn a conviction.

"In the best of times, and that was before COVID, an appeal takes 18 months to two years, so he certainly would have completed the jail portion of his sentence by then," Kling said.

As for COVID at the jail, the spokesman for the Cook County Sheriff tells us there are currently 15 COVID cases out of 6,100 people in custody.