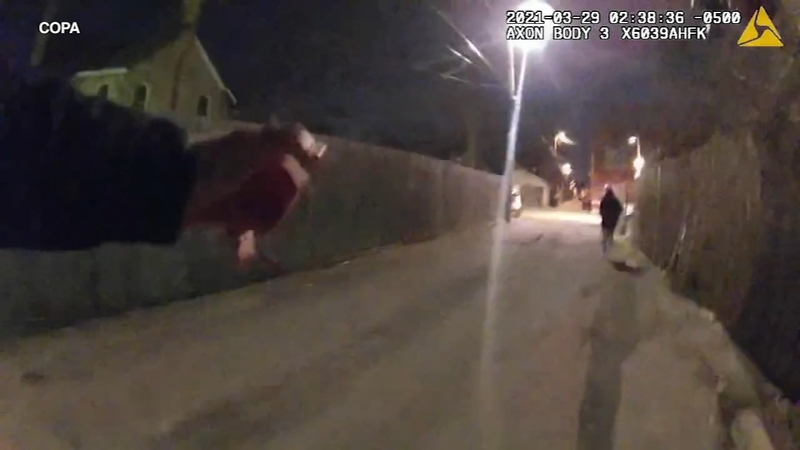 CHICAGO (WLS) -- Mayor Lori Lightfoot says she wants Chicago police to have a revised policy in place before summer, and the Adam Toledo case has critics calling out the city for resisting reform on foot pursuits for several years.

Those reforms require a balancing act that police are working on right now.

Could the tragedy that unfolded in this alley have been avoided? Did the officer follow his training? Those are the questions being debated in the wake of Toledo's death.

"Had there been a foot pursuit policy, it's quite likely that Adam Toledo could be alive," said Sheila Bedi, Clinical Law Professor, Northwestern Pritzker School of Law.

Professor Sheila Bedi said community groups have been pushing for a formal foot pursuit policy since 2018 but the city has balked.

Currently, Chicago police only have a foot pursuit training bulletin. In it, officers are told: "When making the decision to pursue or to continue to pursue, the safety of the public, Department members, and the fleeing subject should be the foremost considerations."

"It needs to make clear that valuing the sanctity of human life is a key consideration when officers are deciding whether to make a foot pursuit in the heat of the moment and similarly, if officers decide not to engage in a foot pursuit, it needs to be clear that they will not be disciplined," said Nusrat Choudhury, Legal Director, ACLU Illinois.

Data from the Chicago Police Department shows how often officer foot pursuits happen and how dangerous they are.

In the most recent report from the independent monitor overseeing Chicago police reforms, the data shows that from March through December of 2020, there were 1,300 foot pursuits.

But in the rush to do something after the Toledo case, there are concerns about getting too restrictive with a pursuit policy.

"We definitely need to have some form of pursuit, otherwise we will just let the bad actors get away," said State Rep. La Shawn Ford, D-Chicago.

"If someone runs that is shooting, you give chase to apprehend. You don't give them a pass. You don't say it's okay, we'll just catch you on the next one," said Ald. Ray Lopez, 15th Ward.

Lopez said what happened to Toledo is tragic, but he is concerned about knee-jerk policy reactions.

"The true issue here is that this officer didn't go into the alley at 2:30 to chase someone just to shoot them. They were responding to a gang incident because a 21-year-old man was trying to recruit a 13-year-old boy to be a part of a gang," Lopez said.

The police department is looking at best practices from around the country. Superintendent David Brown may not have to look any further than where previously worked in Dallas.

"His own former department had a fairly restricted foot pursue policy that likely was in place to try to prevent a tragedy like we saw with Adam Toledo," Bedi said.