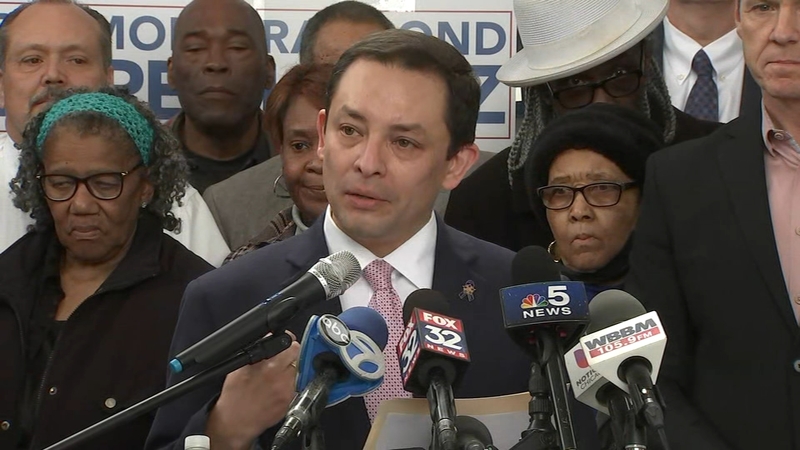 CHICAGO (WLS) -- Chicago Alderman Raymond Lopez announced Wednesday that he is running for mayor of Chicago in 2023.

"Today I am announcing my candidacy for mayor of the greatest city in the world, our city of Chicago," Lopez said.

The outspoken critic of Mayor Lori Lightfoot is the first candidate to officially launch a campaign in what is expected to be a crowded field.

Lopez launched his campaign before Lightfoot has officially announced that she's seeking a second term, although all indications are she will run for reelection.

But Lopez got ahead of the pack with his announcement, and a round of applause from supporters as he launched his bid for mayor. Tackling crime and restoring public safety are his top priorities.

"As mayor, I will be 100% committed to taking ownership of the lives and safety of the people that call Chicago home, for the people that come here to work every day, and for those who choose to visit us for business or vacation," Lopez said.

Lopez, a former skycap for Southwest Airlines, has served as alderman on the city's Southwest Side for the past seven years. He currently serves as alderman of the 15th Ward, which includes parts of Brighton Park, the Back of the Yards and West Englewood.

Like Lightfoot, Lopez is openly gay. He has been married to his husband, Hugo, for 16 years.

A political analyst is weighing in on Chicago Ald. Lopez running for mayor.

"He has a prominent profile, very prominent profile for an alderman and he's been a longtime critic," said ABC7 Political Analyst Laura Washington. "So he's on record in a way that makes his voice compelling. He's a Mexican American so he can bring the Latino voters along. He's conservative, so he can also bring more conservative white voters along and those are some of the folks who've been much most alienated by Lori Lightfoot's administration."

Lopez is now the first officially declared candidate for mayor in what is expected to be a crowded race.

"He has to give up his aldermanic seat in order to run, so he's putting a lot on the table there," Washington said. "But he's been a longtime vocal critic of the mayor on many different fronts. So looks like he's gonna put his money where his mouth is."

Lopez, who has been a vocal supporter of police rank-and-file, said he is considering loosening residency requirements to entice police and other city employees to stay.

"Residency, longevity bonuses and so much more," Lopez said. "Nothing will be off-limits for the 21st Century Chicago workforce."

Mayor Lightfoot did not take questions at her Wednesday morning event, but released a statement through her city council floor leader criticizing Lopez for opposing the mayor's vaccine mandate for city employees, among other things.

"Lori Lightfoot has been trying to tie me to the Ed Burke bogeyman to deflect from her inadequacies for three years," Lopez said. "She is yet to be successful."

Lopez said he's been mulling this decision for a few months, and claimed his polling shows Lightfoot is vulnerable.

"They showed that overwhelmingly the city of Chicago has made a decision on her tenure," Lopez said. "And they are definitely looking for someone new, a new direction."

He expressed confidence that he can raise the millions needed to run a successful campaign for mayor.

"Chicago needs a leader," Lopez said. "It would have been easy for me to sit on the sidelines and get paid and blame the mayor. Or I can be the mayor that turns this city around."

The election is next February.