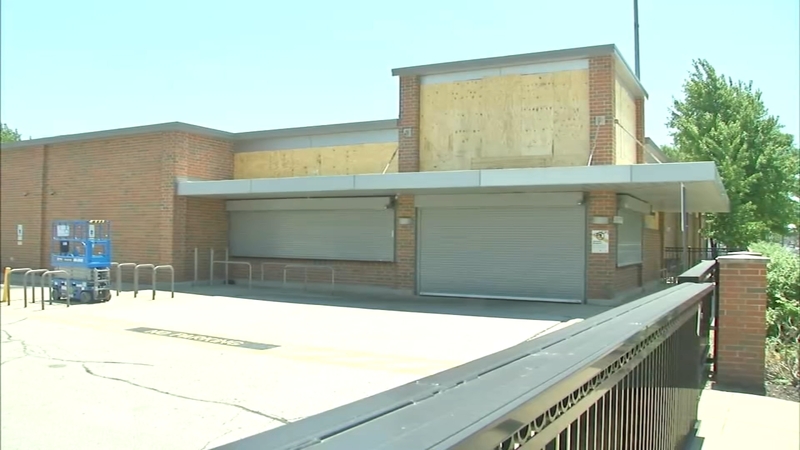 CHICAGO (WLS) -- Shoppers on the South Side have one less place to buy groceries.

The Aldi near 76th and Ashland in Auburn Gresham is boarded up and a sign outside shows the store is now permanently closed.

After walking with a crutch and traveling over three miles by bus to get to her favorite grocery store, South Sider Lizette Watkins arrived to find it closed.

"It's sad because look at me," Watkins said. "I'm on a crutch and pulling and they're not here."

The Chicagoan is among those left shocked after the low-cost grocery store suddenly closed its doors, leaving one less affordable option for fresh meats and produce in the neighborhood.

Although the store permanently closed June 12, many residents say they found out when they went there to shop.

"We need more stores because a lot of people have to travel a long way to come to one store," shopper Karl McAllister said. "That makes it inconvenient."

Now the closure of the Aldi in the Auburn Gresham neighborhood is forcing many customers to travel nearly three miles to get the next closest store in the Englewood neighborhood. That's what 70-year-old James Smith had to do.

"I went down there today and I was shocked that it was closed," Smith said. "I said, 'My God, I have to go all the way back to 63rd Street."

A spokesperson for Aldi said company officials made the difficult decision to close the store, citing crime and poor sales: "Our decision was based on several factors, including repeated burglaries and declining sales. Out of concern for our employees and customers, keeping this store open was no longer a sustainable option. All of our employees have been given the option to continue working at one of our other ALDI locations in the immediate area."

Cynthia Love, who is president of the Auburn Gresham's Block By Block, says neighborhood residents feel betrayed and supports boycotting the grocer.

"I just want Aldi to know we thought the world of them and it's unfortunate they didn't think the world of us," Love said.

17th Ward Alderman David Moore said he's been blindsided by the move, especially after talking to the company about expanding their store offerings.

"I just several months ago approved for them to get packaged liquors," Moore said. "So I'm thinking everything is fine. And so I just don't know why they are closing."

The Aldi closing comes as Whole Foods in Englewood is slated to close and CVS and Save-A-Lot have already shuttered their doors. But for people like Watkins, who live in South Side neighborhoods, it's just another hardship she must endure.