Anita Alvarez comes out swinging as protestors call for her resignation 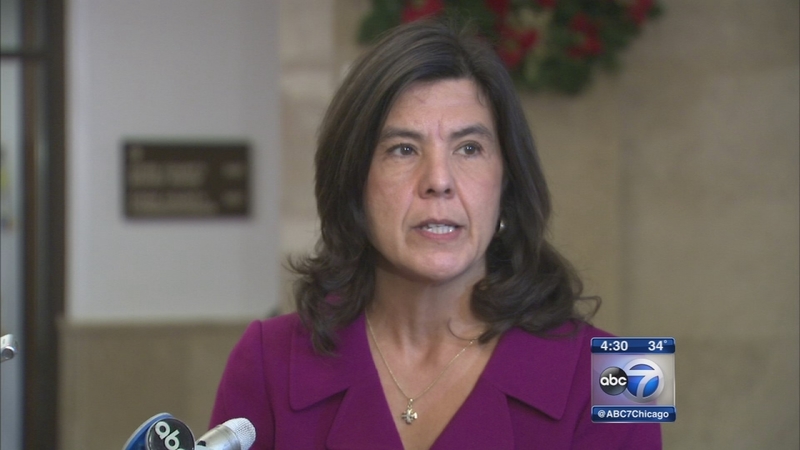 CHICAGO (WLS) -- Protestors staging a 16 hour sit-in at the Cook County building, 69 W. Washington Street, are calling for the resignation of State's Attorney Anita Alvarez as other politicians suggest she go before the Criminal Justice Committee of the Cook County Board.

Alvarez and Chicago Mayor Rahm Emanuel are under mounting pressure to step down following the release of dash cam video showing a Chicago police officer shooting a black teenager 16 times as he walked away. Emanuel fired Garry McCarthy from his position as superintendent of the Chicago Police Department earlier this week.

"Together, we stand before you as a community of conscious. We are united in our love for Chicago and we are heartbroken by the egregious breach of trust that has occurred between our leaders and the citizens they are to serve," Rabbi Brant Rosen said. "Laquan McDonald was murdered in cold blood by Chicago police."

The group of faith leaders and community members delivered a petition with more than 32,000 signatures calling for Alvarez to resign.

"Over one year ago, Laquan McDonald was murdered in cold blood by Chicago Police Office Jason Van Dyke. We know it because we have seen it with our own eyes," Rabbi Rosen said. "Cook County State's Attorney Anita Alvarez knows it as well. She saw footage of Laquan's murder two weeks after it occurred."

Anita Alvarez said she will not resign.

Alvarez and Emanuel fought to keep the video from being released and only brought murder charges when the judge intervened, protestors said. Alvarez defended her office and said the McDonald police shooting case was complicated and involved many jurisdictions.

"These are but excuses. And the excuses ring exceedingly hollow. First degree murder is a state crime. The responsibility for prosecuting lies with her office and her office alone," Rabbi Rosen said.

Rosen said Alvarez has "repeatedly betrayed the public trust" and called for her resignation.

As the protestors began the sit-in, Cook County Commissioners John Fritchey and Jesus "Chuy" Garcia said they are filing a resolution seeking to have Alvarez appear before the Criminal Justice Committee of the Cook County Board. They want Alvarez to answer questions about the McDonald shooting investigation and the timing of the murder charges.

"Why did those charges suddenly appear once the video was ordered to be released? That deserves an explanation," said Fritchey.

"I would want to know why it took this long- as long as it did- for her to bring charges about. The video has not changed," Garcia said.

Alvarez fired back. She said neither of the commissioners called her or asked for a meeting.

"I would be willing to talk in a professional manner. I am not going to be subjected to some political grandstanding and circus, which is what I think they have in mind," Alvarez said.

She went on the attack.

"Commissioner Fritchey is one of the most self-serving people I have ever met," Alvarez said. About Garcia, she said, "He knew that tape was available back in April when the city made the settlement. Did Commissioner Garcia stand up here and yell and scream he wanted to see that video?"

Alvarez said she will not resign and has refused to bow to political pressure.

"I absolutely have no intention of stepping down. I was voted in to do a job and I'm doing that job," Alvarez said.

Alvarez is running for re-election in March.

"I'd rather lose an election than compromise the integrity of my investigation. I've done this job for 29 years, speaking on the behalf of victims of Cook County. The majority of victims being minority. And to be betrayed in this light by seasoned politicians with political agendas is disgusting and degrading," she said.