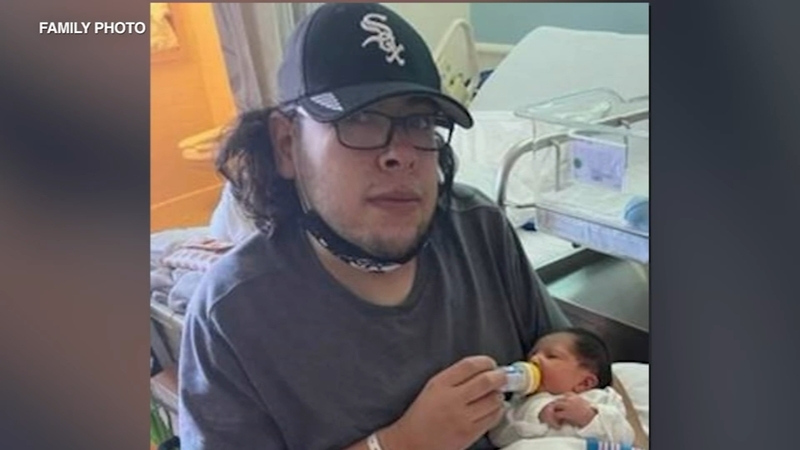 BERWYN, Ill. (WLS) -- Berwyn police said a man was stabbed to death while trying to stop a fight at Valle's Produce Friday morning.

The girl told the customer she wasn't cutting in line, but police said the man began swearing at her and then physically attacked her, punching her several times in the face. The girl's mother intervened and was also punched in the face by the customer.

"He started punching her," said Berwyn Police Chief Michael Cimaglia. "The mother tried to intervene and protect her child, and then the mother got punched."

A good Samaritan in the store attempted to intervene in the attack. Police said witnesses told them the angry man initially walked away, but then stopped, returned, pulled out a knife and stabbed the good Samaritan multiple times in the chest and torso.

Guzman's sister said he works for Vitner's potato chips and was at the store to make a delivery at the time of the attack. He leaves behind a wife and young daughter. Berwyn police called him a "true hero."

Meanwhile, the attacker ran from the store and down an alley, where a second good Samaritan confronted him and was stabbed in the torso, police said. That person was treated at a hospital and expected to be released later Friday.

"Pulling out a knife and injuring two individuals and killing one of them, obviously there's something not right with that individual," said nearby business owner Jesus Salazar.

Police found the suspect covered in blood in a backyard in the 2300-block of Cuyler Avenue and took him into custody. Charges have not yet been filed.

Police said the Berwyn man now in custody has no history of violent crime, and they're not aware of any previous disputes at Valle's.

The teenage girl was treated at a hospital for her injuries, police said.