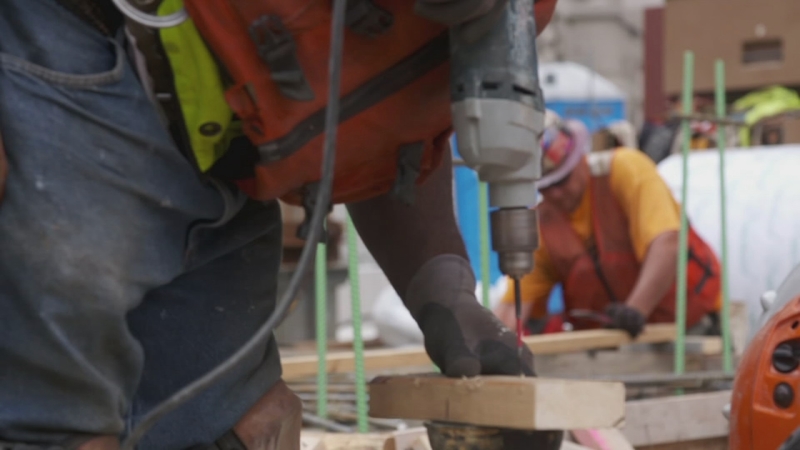 BUILT TO LAST is an informative series of half-hour specials exploring the skill, training and artistry of trade union members and contractors. The series of specials highlights the projects they've worked on and the people whose lives they have touched.

Highly trained members of the skilled labor force have always played an important role in economic development throughout the United States and have made significant contributions to communities across Chicago and the suburbs. Season Four examines how the use of skilled union labor ensures quality and safety while interweaving profiles of some of the talented people who comprise the members of America's Labor Unions with real life stories of the people they've helped.

Episode 1: America is Back!
The Season Four BUILT TO LAST debut episode profiles Jason Watkins, a veteran, husband and devoted father, who was struggling to make ends meet. His life was transformed when he joined the Carpenters Union, learned the trade and secured a job with one of Chicago's top contractors. He talks about how his days are filled with excitement as he develops more skills that will continue to help him provide for his family.

Episode 2: Hearts and Hammers
The second edition of BUILT TO LAST records the emotional story of the Rivera family who shortly after adopting a son, received the devastating news that he had an aggressive form of muscular dystrophy. Every day brought a fresh set of challenges until a band of heroes wielding hammers and saws transformed the Rivera house into a place much more suited to Lee Rivera's special needs.

Episode 3: Grand Canyon of the Midwest!
Kyle Moser's dream of being a part of the armed forces met with tragedy when he was seriously injured after deployment in Afghanistan, returning home a double-amputee. BUILT TO LAST episode three reveals how through the love of his wife, the support of Jared Allen's Homes for Wounded Warriors and the Carpenters Union, Kyle is better prepared to meet the challenges ahead.

Episode 4: Bronzeville Rising!
As the epicenter of the Great Migration in the 20th century, the Bronzeville neighborhood became a beacon for middle-class African Americans. The crown jewel of this neighborhood was Rosenwald Courts, an apartment complex that was once home to such luminaries as Jesse Owens, Nat King Cole, Duke Ellington and Joe Louis. In this fourth episode, BUILT TO LAST spotlights how this neighborhood and apartment complex, after years of neglect and disrepair, experienced renewal with the help of union carpenters.

Episode 5: Hear Me Roar
Join hosts Monica Pedersen and Mark Nilsson for a look at why women are joining skilled unions at the highest rate since the Great War. And then host Rob North will introduce us to some heroes in hard hats.

Episode 6: Building, Bravery, and Breweries
Hosts Monica Pedersen and Mark Nilsson explore one of the largest residential construction projects in the country. And then, host Rob North checks in with wounded warrior, Kyle Moser, as he receives some important news.

Episode 7: If You Build It
Join hosts Monica Pedersen and Mark Nilsson for a tour of some of Chicago's legendary private homes. And then watch a jail be transformed for children!

Episode 8: Go West
Hosts Monica Pedersen and Mark Nilsson visit Chicago's West Loop. We'll meet the tradesmen, the public officials, and business owners, who transformed what was once Skid Row into one of the hottest neighborhoods in the country.

Episode 9: Hammers, Hearts, and MAGIC!
Hosts Monica Pedersen and Mark Nilsson discover how one magical place is improving the lives of those in need, meet some Sisters in the Brotherhood, and a very special type of carpenter.

Episode 10: The Pebble and The River!
Hosts Monica Pedersen and Mark Nilsson take a trip down the river that built America's Second City, get airborne, and discover how to build a community around a pebble.

Episode 11: Buildin' It Like They Use To!
Surrounded by danger, hosts Monica Pedersen and Mark Nilsson explore how the trades, training, and new technology are protecting everything from patients to fish.

Episode 12: If You Build It...
As the Cubs finally win the trades rebuild the home of champions; host Monica Pedersen, Mark Nilsson, and Rob North check in with a hero and an athlete who are built to last.