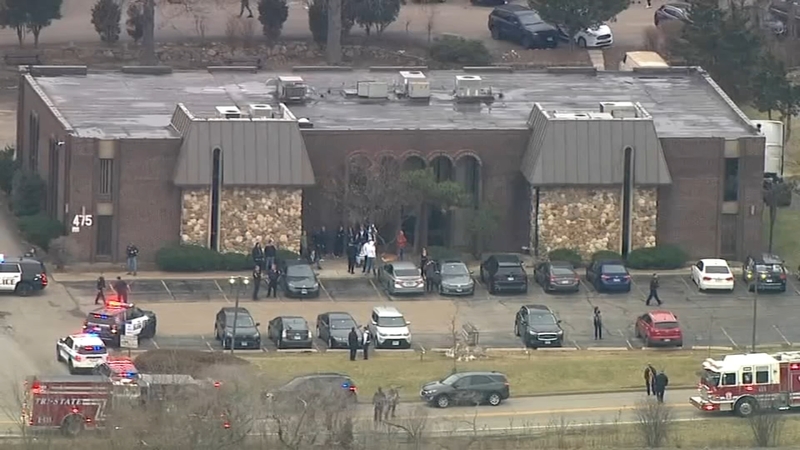 BURR RIDGE, Ill. (WLS) -- Burr Ridge officials said an employee at a trucking company who was about to be fired fatally shot his boss and injured another former coworker before taking his own life Tuesday.

The incident began about 3 p.m. at Winner's Freight, located in an office park at 16W475 S. Frontage Road.

"He worked for them for one week," said Deputy Chief Marc Loftus. "He delivered one load. There was a disagreement over whether he wanted to do another one, so the company was going to fire him."

Burr Ridge Mayor Gary Grasso said Misovic was shot multiple times. He said Spicer was about to be fired, and Misovic was his boss. Misovic was taken to Hinsdale Hospital, where he later died from his injuries.

Police said after shooting Misovic, Spicer went to two other logistics firms inside the same office park where he had previously worked. He shot and severely injured a female accountant in the second company, Force Transportation, then went to Egzit Logistics but left after finding out the boss wasn't there.

The 31-year-old woman was shot multiple times, but was stable in the ICU as of Wednesday morning.

Police said after the shootings, Spicer walked about three quarters of a mile to another business and asked to use the bathroom. Twenty minutes later, employees asked him to leave and called police, who by then had already blanketed the area with a manhunt under way. He was quickly located sitting on a sidewalk outside.

"From what I understand, the initial officer pulled up, saw Spicer," Loftus said. "Spicer moved his hand, the officer went behind his car for cover, while he was going around the car for cover he heard a shot, looked over and Spicer was dead."

Police said Spicer had been living in a La Quinta Inn in Willowbrook for about a week. A search warrant executed on his room revealed an empty holster.

Investigators said Spicer had one conviction in Arkansas for domestic battery, but he was known to Schaumburg police as well for an eerily similar situation. Police said they were called into deal with a management dispute between himself and his boss at another logistics company, where Spicer was refusing to hand over the keys for one of their trucks. There were no physical threats or weapons displayed in that case, Schaumburg police said.

RELATED: Memorial to remember 5 killed in shooting at Henry Pratt in Aurora 3 years ago