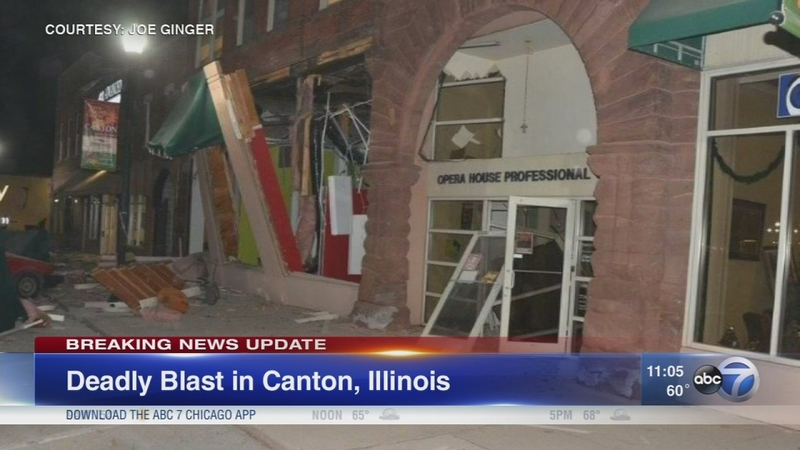 CANTON, Ill. -- Authorities on Thursday were investigating the cause of a gas explosion that rocked downtown homes and businesses in a central Illinois community, shattering glass and cracking interior walls in nearby buildings and killing one person and injuring several others.

The blast Wednesday evening in Canton, which is 150 miles southwest of Chicago, happened while utility workers were trying to fix a gas leak that a contractor apparently caused while digging, officials said.

"The impact of this blast was tremendous and that caused some serious, serious damage," the city's police chief, Rick Nichols, said at a news conference Thursday.

Ameren Illinois said its crew had turned off the gas and was beginning to make repairs when the explosion happened. Nichols said investigators are still trying to determine what ignited the blast.

Authorities said there were a total of 12 people who were taken to hospitals, though it wasn't immediately clear if that included the worker who died.

Nichols said searchers haven't found any new casualties, but that officers are still trying to make sure that everyone else who was in the area got out safely.

"We're hopeful that there's no one else who's unaccounted for," he said. A damage cost estimate wasn't available yet, Nichols said.

Jill Dillefeld, a psychiatric nurse from Canton, told the (Peoria) Journal Star that she was eating at a bar about a block from the square when she heard "the biggest kaboom I have ever heard in my life."

"Everyone jumped," she said. "The door where I was sitting blew open."

Several buildings were damaged by the blast, including a historic 19th century Opera House that now houses offices. The police chief said officials hope to shrink the closed area to one block around the blast, but that it can only be done once it has been deemed safe.

"We have structural engineers in the area checking area buildings. This is a very slow and methodical process. They are working hard and as fast as possible," the Fulton County Emergency Services Disaster Agency said in a statement.

The National Transportation Safety Board tweeted Thursday that it opened an investigation into the blast.