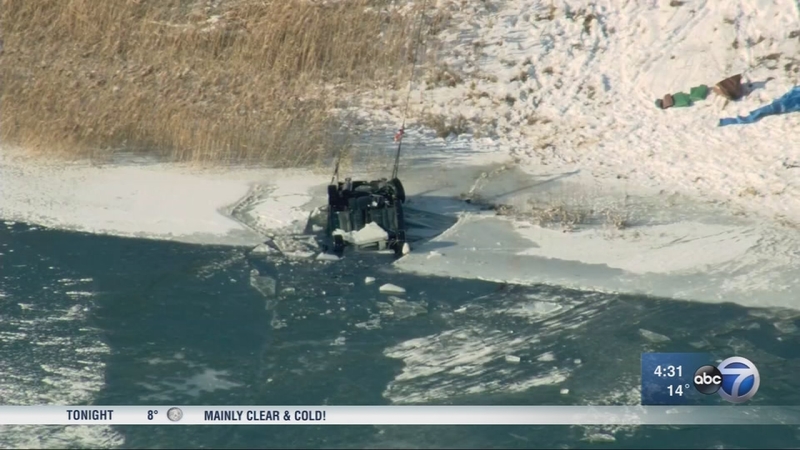 LYNWOOD, Ill. (WLS) -- A vehicle was pulled from an icy pond Monday afternoon in south suburban Lynwood, a day after a report that a vehicle plunged into the water as temperatures dropped below zero.

Officials said an African American male was found inside the SUV when it was recovered. Officials said the car landed on its roof underwater, approximately 30 feet deep, and that it sustained heavy damage.

"When we first got out there this morning it was -9, the wind kind of picked up as the morning went on," said Lynwood Fire Chief John Cobb.

"The first department did have to go in and break through the ice, deal with the water freezing over, equipment freezing," said Commander John Blair, Cook County Sheriff Police.

It was immediately unknown how thecar went into the Woodland Reservoir in the 3000-block of East Lincoln Highway. A witness told police that two people were inside the car and after it went in the pond, a person was seen yelling for help, but then went back underwater.

A search continues for that possible second victim based on the witness's statements.

Tire tracks leading into the water stretched about one-eighth of a mile.

Dive teams located the car Sunday, but were not able to get it out. The search was suspended after 5 p.m.

Monday's efforts were a recovery mission and started at 11 a.m. The vehicle was recovered around w2 p.m.
WATCH: DIVERS GO INTO WATER