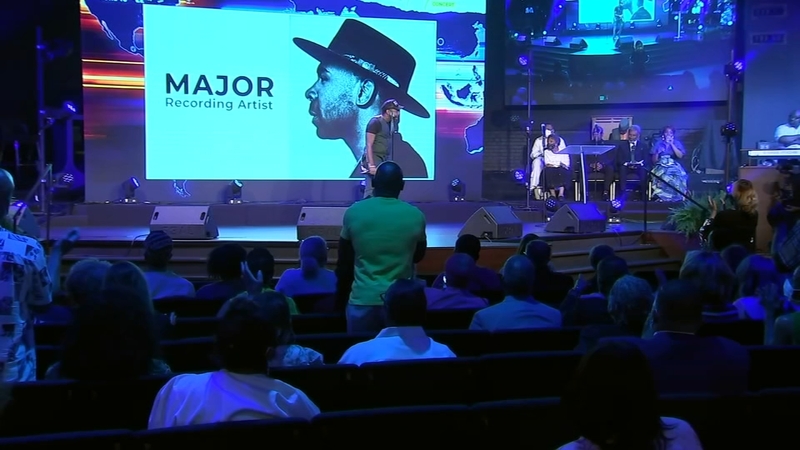 CHICAGO (WLS) -- It's been a day of celebration through song and dance.

A resounding noise rang through Fellowship Missionary Baptist Church in Fuller Park as singers spoke for their voiceless ancestors.

"Thousands of African-Americans in slavery had no idea that the Emancipation had gone through, lived through an extended time of pain, anguish and abuse. So, it's significant in that tough times don't last, tough people do," said Bishop Tavis Grant of the Rainbow Push Coalition. "The Black church has been the hallmark of civil rights and what a time it is to celebrate Juneteenth in Chicago."

People came together to celebrate Juneteenth, which commemorates the day in 1865 when enslaved Black people in Texas were finally told they were free.

"It's just a time to come out and celebrate African-American culture and what it truly means to have been liberated and to be free," said Pablo Ortiz, who is visiting from Connecticut.

"Black men chose to be fathers, because slavery was basically a whole separation of fatherhood," said Rael Jackson, president of Real Men Cook.

St. Sabina Church kicked off its Juneteenth festivities and Chance the Rapper is to perform at the DuSable Museum.

Smiles were plenty at St. Sabina Church, remembering the day in 1865.

The DuSable Museum is held a Juneteenth BBQ and block party, amplifying Black voices. Good conversation, music, food and more happened at the newly renamed "The Du" in honor of Juneteenth on Sunday.

Chicago native Chance the Rapper is hosting the event that is filled with something for the entire family.

Chicago native Chance the Rapper hosted the event that is filled with something for the entire family.

There was horseback riding for kids, a quilting exhibition and concert from 11 a.m. to 8 p.m. at the DuSable Museum of African American History, located at 740 E. 56th Place in Chicago.

"It's a lot going on!" Chance said. "We wanted to keep it going this year and give our people an opportunity to connect. The fact that it's on Father's Day allows us to appreciate Black dads, and we're in a place where Black people in America and globally just need spaces to be together."

"We do focus on black girls. Seeing that we are Black women, we just want to make sure that we give girls an opportunity to focus on their blackness. Juneteenth is a great opportunity. Everybody's coming out. It's a nice day," said Roland.

Juneteenth became a federal holiday for the first time last year. Attendees hope its recognition will continue to grow.

"We're glad. At least it's finally being acknowledged," said Tammy O'Neal, who lives in Chicago.

"I don't think a lot of people knew about Juneteenth in general, but now that the awareness is out there and the whole positivity as far as the African-American experience, and how much contribution that African-Americans have done to this country as a whole, it's just good to finally recognize it," said Greg Shuford, who lives in Hyde park.

Chance the Rapper was also in attendance. He was visiting with families earlier.