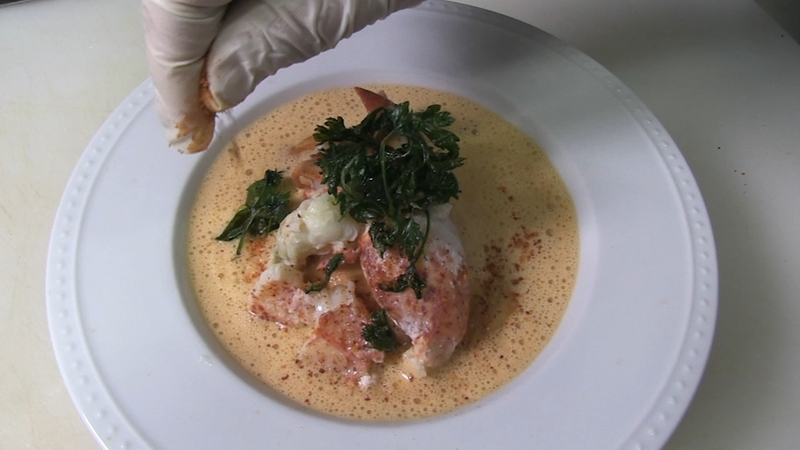 HIGHLAND PARK, Ill. (WLS) -- Have French restaurants gone out of fashion? There may be fewer in the region than there used to be, but one little bistro in downtown Highland Park is giving the North Shore reason to go out to eat. It's run by a couple with decades of experience in the restaurant business, with a simple menu of French classics.

You might think French bistro fare is all onion soup and steak frites. Well Chez Benoit has those two items on its menu, but also a number of other dishes you might not be as familiar with.

Not to worry. It's pretty hard to find anything on their compact menu that's not worth swooning over. Especially two dishes I tasted recently that have me wanting to make a return trip.

Steve takes a look at one of Chez Benoit's outstanding desserts - a pistachio dacquoise, with layers of almond-hazelnut cake.

Benoit Fliou only moved to Chicago six years ago, but he's distilled the essence of more than 30 years of cooking into his relatively new Highland Park bistro, Chez Benoit.

"I would say that I try to bring a little part of the Parisian atmosphere in Chicago, in the North Shore," said Fliou.

Mornings are spent cooking down onions until they're caramelized and soft for onion soup, or slow-cooking a sauce au poivre, with black pepper, cognac and cream, which will eventually be draped over a classic steak served with perfectly crisp frites. But you must begin with his Leek Vinaigrette. He first manages to render the notoriously tough vegetable completely pliable and soft.

"They are boiled, so we need to cook them all the way through," he said.

He scatters a chunky vinaigrette over the top, embedded with shallots, chive and parsley.

"And then we plate them with hard-boiled eggs," said Fliou.

Those crushed egg whites are garnished with finely-chopped chives and shallots, then two halves of a hard-boiled egg and fresh herbs.

"That chunky vinaigrette...and people just love it," he said.

For main dishes, Fliou has brought back a classic from his childhood - a whitefish quenelle, bathed in lobster bisque.

"This is a very traditional dish from the city of Lyon. We are making a mousse with a puffed dough, and we have some whitefish, egg white, and we just fold cream in it and we steam that quenelle. We just finish it in the oven and it gives a wonderful color," he said.

He then emulsifies the homemade lobster bisque to give it an airy, almost frothy quality. Some poached lobster is added for extra luxe, along with a mound of fried parsley and a pinch of imported esplette pepper.

"It's one of our signature dishes for sure," said Fliou.