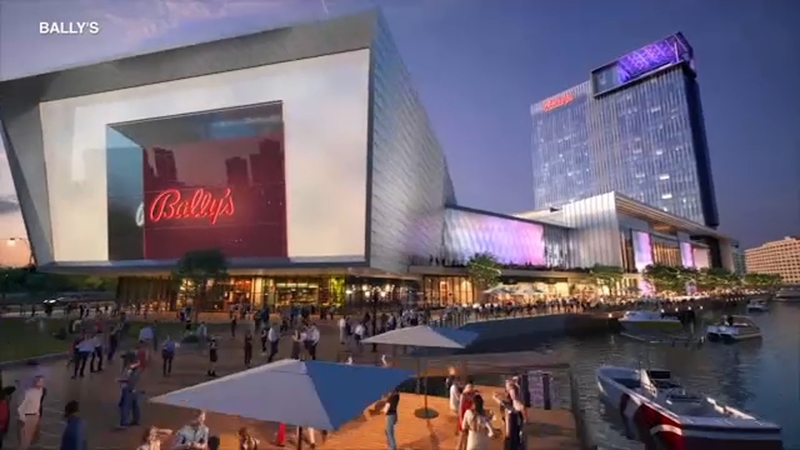 CHICAGO (WLS) -- Plans for a Chicago casino took an important step forward Monday as a special city council committee voted to send the plans for Bally's casino to the full city council.

The committee voted 27 to 3 to approve the plan. Aldermen Brendan Reilly, Brian Hopkins and Michele Smith voted against the measure.

Mayor Lori Lightfoot's team used a parliamentary maneuver to delay a full city council vote Monday, but ensured one would happen at the next scheduled meeting on Wednesday.

The mayor has previously expressed confidence that there will be the votes to pass the measure when it makes it to the full city council, but it was clear on Monday that city council members still had a lot of questions they wanted answered.

The proposed Bally's casino in the River West neighborhood is inching closer to city council approval, but aldermen are still demanding answers. Projected revenues are one big concern, with the money earmarked for pensions so property taxes don't have to be raised.

"I'll go on the record right now," 2nd Ward Ald. Brian Hopkins said. "I don't believe we're going to see $200 million a year from this in six years, I don't believe it."

"Would Bally's be willing to guarantee the city a baseline of $200 million in annual revenue after 2027, holding taxpayers harmless if these projections are woefully overstated?" 42nd Ward Ald. Brendan Reilly asked.

And even though Bally's is committing $2 million a year to security around the temporary site at Medinah Temple in River North, there were still concerns about safety.

"I think there needs to be a fully vetted transparent safety plan that we're all in agreement on," 46th Ward Ald. Harry Osterman said.

The city also clarified that due to planned street improvements, the temporary casino had to be moved from the old Tribune site to River North.

Aldermen also expressed concerns about how minority investments and crowdsourcing would work, and how Bally's would handle the homeless. Aldermen were also frustrated by the pressure to move so quickly.

"Is there some reason we're moving heaven and earth in the schedules to get a vote today or this week?" 49th Ward Ald. Maria Hadden asked.
"This is your final crack at the apple, folks," Reilly said, "and once you let this go, it's a black check for the administration to finish the work."

"I don't know what else we can do if we postpone this," 27th Ward Ald. Walter Burnett said. "Are we going to miss the boat and have to come up with something else in order to make these things happen?"