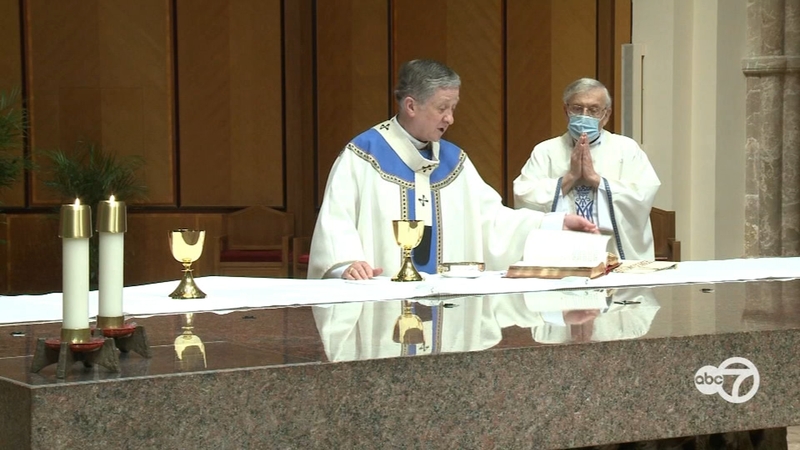 "What we're talking about here is a real culture shift for us, because we took for granted that people would just come to church and take a pew seat with a view and worship," said Cardinal Cupich.

The first phase of the cardinal's plan begins next week, when parish volunteers will be trained to implement the gradual reopening in webinars. Those volunteers will be picked from "non-vulnerable" groups and additional precautions are planned.

"There'll be things such as temperature taking and get an idea of they if they show any symptoms but also that group would be younger people," Cardinal Cupich told ABC 7.

On May 23, churches that pass a readiness test would be allowed to open for funerals, weddings, baptisms and reconciliation, but only for groups of 10 people or less. On May 30, those churches could expand to include private prayer and adoration, also limited to 10 people groups.

What happens next -- opening services for larger groups and masses-- is not determined or approved, as of Thursday. But, it might possibly include strict limits on reduced church capacity and social distancing rules.

"This contagion, this enemy of the virus, is only going to be conquered if we all stick together," said Cardinal Cupich.

He does not agree with pastors of some Illinois churches who say they're opening for regular services against the governor's stay-at-home order, claiming a constitutional right.

"People do have freedom of religion, the right to worship and so on. And yet, it's not an absolute right if the public good, and public health, is jeopardized as a result," Cardinal Cupich said.

The cardinal admits the pandemic is creating a financial challenge for the church, but he notes many people who've lost their jobs are in the same situation.