All Illinois Secretary of State offices, including driver services, will also be closed until at least Jan. 18 starting Monday
WLS
By Stephanie Wade 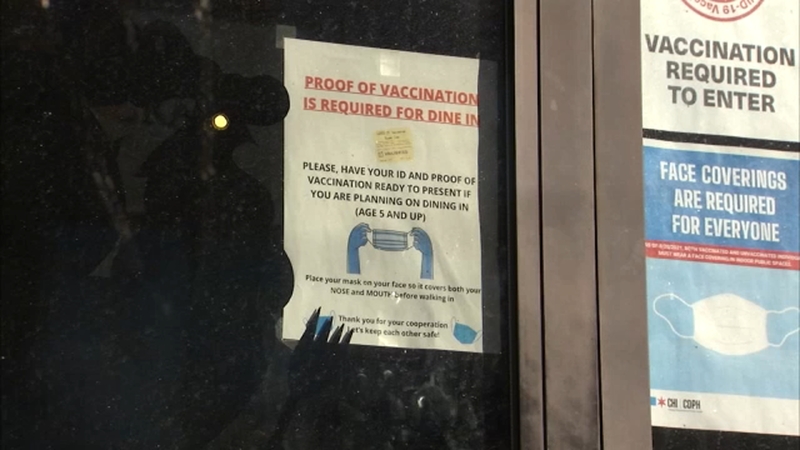 CHICAGO (WLS) -- Chicago will require COVID-19 vaccination proof for indoor venues and Illinois Secretary of State offices will be closed starting Monday due to a surge in infections.

Businesses are gearing up for Chicago's new COVID vaccine mandate to go into effect Monday.

Only proof of vaccination, whether it's a physical card, a picture of your card, or through the state's new SMART health card pass on your phone, will now grant you entry into restaurants, bars and gyms in Chicago and suburban Cook County.

"I have a picture on my phone. And then I just got my booster and stuff like that, too, so that's all on there,' said Tim Steinman.

The proof of vaccine rules will apply to everyone age 5 and older, but does not apply to those inside venues for less than 10 minutes, like those picking up takeout.

"With the surge and whatnot, it definitely makes the customers feel safer, but it also makes the staff feel safer," added Adam Dempewolf, general manager at Jerry's Sandwiches.

Jerry's Sandwiches in Lincoln Square has already been asking customers for their vaccine cards since before Thanksgiving in an attempt to avoid the holiday surge.

"Sometimes the line can get one or two parties deep but everybody's patient," Dempewolf said.

"I'm fine with it, you know. I would rather they were doing it, so I'm good with it," Steinman said.

A political analyst weighed in on the latest Chicago COVID restrictions Thursday.

Lucy's Cafe in Roscoe Village said they will now also be checking folks for their vaccine cards right when they walk in. However, they worry they might have to hire additional staff to do so, especially when they get so busy on the weekends.

"The other concern I have is that first of all, the pool of people that come join us is going to shrink a little bit because not everybody is vaccinated," said Martin Faisal, owner and chef at Lucy's Café.

Faisal is a busy man and fears it will only get more hectic come Monday having to check and verify people's vaccine cards, but he's hoping for the best.

"I'm afraid of having encounters with customers that are not vaccinated and want to have lunch or breakfast with us and I have to turn them down. That may cause a little friction which I don't welcome and I don't want it, but it is what it is," he said. "People are going to have to deal with it and I think people will understand."

The Secretary of State office closures for in-person services begin Monday and last until at least Jan. 18.

"The health and safety of employees and the public remains paramount, and face-to-face transactions potentially increase the further spread of the virus," Secretary of State Jesse White said in a statement. He is encouraging people to make online transactions whenever possible, including for renewing a driver's license.

The move comes as Illinois and the rest of the country are seeing a COVID-19 surge to the highest levels on record.

Also, Illinois General Assembly leaders announced two of three planned session days would be canceled this week due to the surge. Leaders said session days the following week would also likely be canceled.