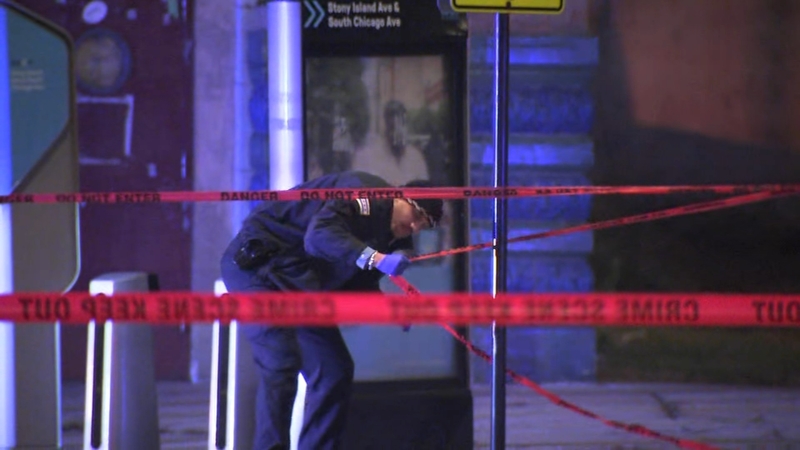 CHICAGO (WLS) -- A pedestrian was killed Tuesday morning after two cars were involved in a crash and one hit her while she was crossing the street in Chicago's South Chicago neighborhood, CPD said.

Chicago police said the driver of a black SUV was involved in a crash with a burgundy Rav4 just before 4 a.m. in the 1600-block of East 79th Street and then hit the female pedestrian, who was crossing the street.

The SUV then drove away, traveling west on 79th Street.

The female victim was taken to University of Chicago Medical Center, where she was pronounced deceased.

RELATED: Back of the Yards hit-and-run leaves bicyclist, 59, dead

Police tape, officers and a pair of gym shoes could be seen after the crash, as police continued to divert traffic about 6 a.m.

No other injuries were reported, and no one was in custody later Tuesday morning.

The person killed was not immediately identified.

A man who works nearby said he heard the crash, then what sounded like an argument before the car sped away.

He said he came outside of the restaurant and saw the woman on the ground.

"I heard like a big loud noise, a gunshot or something, then bam!" Gabriel Reyes said. "Some cars were racing back and forth and left down South Shore."

Reyes was working inside of Maxwell Street Grill when it all unfolded steps away from the restaurant.

"Yeah! Right in the middle of the street, right there. I saw someone sitting there. Somebody said they they got hurt. I thought they were waiting for an ambulance to pick them up or something," he said. "This could happen to anybody. We come here working every day, and you never know. I go through this everyday."