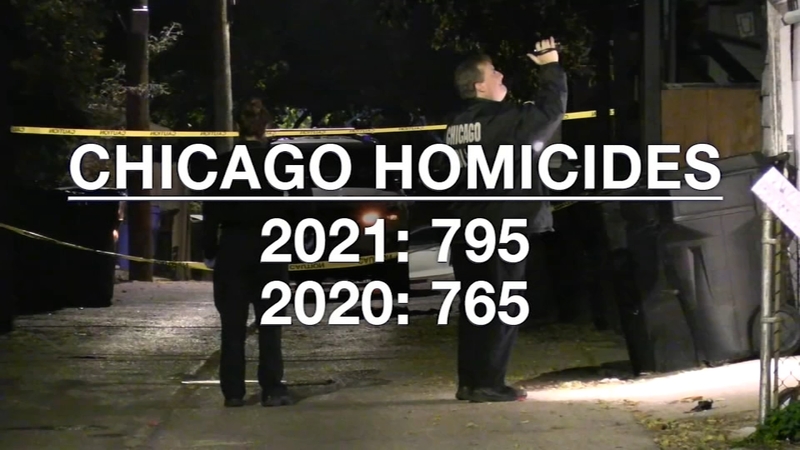 CHICAGO (WLS) -- Pastor Donovan Price has been to scenes of about 200 homicides this year in Chicago.

"It is depressing. It is sad. But it is necessary that people are still loved in these situations," said Price from Solutions and Resources Inc.

SEE ALSO | How to address spike in homicides in Cook County?

According to Chicago Police Department data, the city has had at least 795 homicides so far this year. At this time in 2020, Chicago had recorded 765 homicides. The last year the city had so many homicides was 1995. That year, it was 827.

"I think somebody somewhere at the top should be ashamed of that. The leadership of the city should definitely be ashamed," said Tamar Manasseh with Mothers/Men Against Senseless Killings.

This year, the Austin neighborhood has been leading the city in homicides with 71, followed by North Lawndale at 44 and Greater Grand Crossing at 40.

Community groups and organizations focused on violence-reduction point to several factors for the spike in homicides.

"There are systemic reasons. There are psychological reasons, cultural reasons," Price said.

Frank Perez oversees the violence prevention and intervention services at UCAN. He said it's about resources.

"Some of the highest risk communities for violence are those communities that for generations have suffered," Perez said.

But Manasseh believes there is more to it.

Charles Decuire is the Austin outreach supervisor for the Institute for Nonviolence Chicago. He said it's time to go back to the drawing board. Although this year's homicide numbers are discouraging, Decuire said he's still hopeful for a safer 2022.