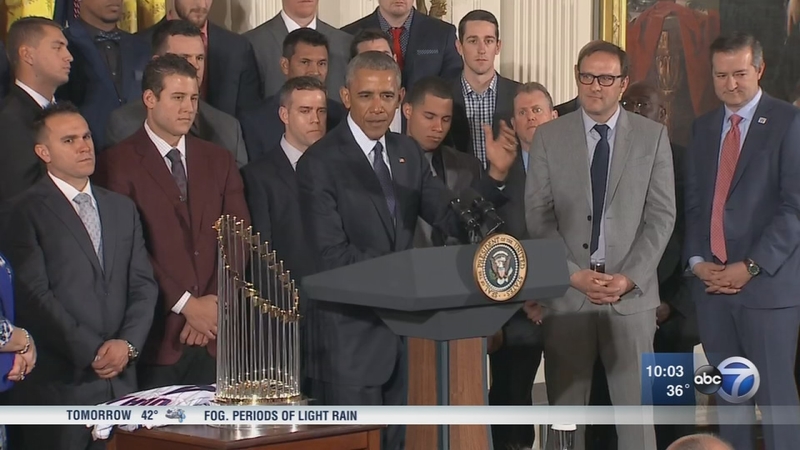 "I will say to the Cubs, it took you long enough. I've only got four days left. You're just making it under the line," said President Obama to the Cubs during the visit. "Even I was not crazy enough to suggest that during these eight years, we would see the Cubs win the World Series. But I did say that there has never been anything false about hope."

The team ended the longest championship drought in professional sports on November 3, 2016, with their win in game 7 of the World Series against the Cleveland Indians.

President Obama commemorated the World Series champions by talking about how sports brings people together.

"It is worth remembering, because sometimes people wonder, 'Well, why are you spending time on sports, there's other stuff going on,' that throughout our history, sports has had this power to bring us together, even when the country's divided. Sports has changed attitudes and culture in ways that seem subtle, but that ultimately made us think differently about ourselves and who we were," said Obama.

Obama, who is a Chicago White Sox fan, put his fandom aside for one day to welcome the Cubs. He also acknowledged that First Lady Michelle Obama is a lifelong Cubs fan and that this is the first time she has attended a championship team visit. He noted that her favorite player, Jose Cardenal, who played for the Cubs from 1972 through 1977, was in attendance at the White House.

The World Champion Chicago Cubs were honored by President Barack Obama at the White House on Monday.

Obama said that Michelle had not come to a single event celebrating a championship team at the White House until Monday. Michelle shook hands with the players and told them how much the Cubs winning meant to her.

"She remembers coming home from school and her dad would be watching the Cubs game and the bond and the family, the meaning, that the Cubs have for her in terms of connecting with her father, and why it meant so much for her. I almost choked up listening to it and it spoke, I think, to how people feel about this organization," Obama said.

The World Champion Chicago Cubs and Theo Epstein presented President Barack Obama with a custom jersey, lifetime ticket to Wrigley Field and other gifts at the White House on Monday.

Obama talked about the Cubs championship meant to his staff. He noted that the last time the Cubs won the World Series Roosevelt was president along with many other historical and technological advancements that happened in the intervening century between the team's championships. The first radio broadcast wouldn't happen for another two decades following the 1908 victory.

The president also joked about how he and recently retired catcher David Ross both enjoyed a year long retirement party.

"Unlike Grandpa, my team has not yet brought me a scooter with a motorized golf caddy, but there are four days left, maybe I'll get that," Obama said.

First baseman Anthony Rizzo gave president two "44" jerseys with Obama's name on them, including one that just said "Chicago." The Cubs also gave him a "44" from the Wrigley Field scoreboard and a "W" flag signed by the entire team. Cubs President Theo Epstein said he hopes the flag will fly at the Obama Presidential Library when it is built in Chicago.

From one 44 to another, thanks for finally giving @FLOTUS and generations of hopeful fans a @Cubs championship. pic.twitter.com/RnLyTYF2ub

The Cubs arrived in Washington D.C. Sunday. The team met with President Barack Obama in the final days of his presidency, and on the heels of this weekend's Cubs Convention.

"I think we're all excited for it. When we played the Nationals in D.C. earlier, I got a tour, but it was probably the C tour. Hopefully we'll get the A plus tour when we're there," said Cubs third basemen Kris Bryant.

"We're all excited. There's probably three people I would be star-struck by and he is one of them," said Cubs shortstop Addison Russell.

Cubs pitcher Jake Arrieta has not joined his teammates in Washington.

Arrieta said he needs to be home - his mother-in-law is recovering from brain surgery, son Cooper is having a tooth pulled that day.

The decision, Arrieta insists, has nothing to do with politics.
A day after Donald Trump beat Hillary Clinton in the presidential election, Arrieta tweeted it was "Time for Hollywood to pony up and head for the border." The ace offered to help with the packing, too.

Arrieta, who said he didn't vote, on Friday suggested his message in November was misinterpreted.

"I was simply calling out people that said they were going to leave the country if Trump was elected," he said before the start of the team's annual winter convention. "It's not a pro-Trump tweet. It's not an anti-Hillary tweet. I don't care who the president is. I want whoever's president to do a good job."

"People view us as athletes as being Republican and only caring about lower taxes, which isn't the case," he said. "If paying higher taxes is going to benefit the majority of society, I'm fine with that. ... I'll be open and honest. I just want somebody to lead our country and do a good job. Whether it's Obama, whether it's Trump or Hillary, I just want to see somebody do a good job for the benefit of everybody."